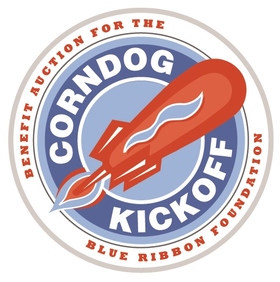 Des Moines-The internationally-acclaimed Iowa State Fair attracts more than a million people from around the world each year. While everyone has their own favorite area of the Fairgrounds, there is no denying that the Iowa State Fair really comes to life with the energy on the Midway. The spectacular Midway on the Fairgrounds has received an upgrade, featuring something for everyone to enjoy. Fasten your seat belts and enjoy twists and thrills at the Blue Ribbon Foundation 21st annual Corndog Kickoff.

"What A Ride" you will have at the Corndog Kickoff Benefit Auction and Fair Food Grazing Party, Saturday, July 8 at the Iowa State Fairgrounds. Doors to the William C. Knapp Varied Industries Building will open at 6:30 p.m. for a night filled with top-notch auction packages, entertainment and all of your favorite Fair foods. If you are a thrill-seeker or an adrenaline junkie, you'll love this adventure raising funds to renovate and restore the historic Fairgrounds!

More than 240 enticing auction packages fill the live and silent auctions. Throw a party with ease at the FFA Enrichment Center; catering and floral services have already been arranged, all you have to do is create the invite list. Enjoy the Magic Kingdom at Disney with four one-day hopper passes. A Viking Adventure has two tickets to a 2017 regular season Minnesota Vikings game at US Bank Stadium plus an autographed Stefan Diggs photo. Or, score tickets to your own personal band box with twelve tickets to every single concert in the Grandstand.

The Corndog Kickoff has been a pre-fair tradition since it began in 1997. First held in Pioneer Hall, 460 people were in attendance. Since then, the event has grown to raise more than $4.4 million for the restoration and preservation of the Iowa State Fairgrounds. The 2016 event brought a record crowd of 2,000 people and raised a record high $684,600!

"The Blue Ribbon Foundation has been raising funds to help improve the treasured Fairgrounds for 25 years," said Peter Cownie, Foundation Executive Director. "The Corndog Kickoff has been a key fundraising component for 21 of those years. Thank you to the loyal supporters dedicated to ensuring the Iowa State Fair's future."

All-inclusive Corndog Kickoff tickets are $125 each. Tickets can be purchased by calling the Blue Ribbon Foundation at (800) 450-3732, online at www.BlueRibbonFoundation.org or at the door the night of the event.