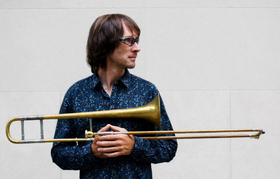 Guest artist and composer Chris Washburne, trombone, will perform alongside the Crane Latin Ensemble at SUNY Potsdam's Crane School of Music on March 16.

POTSDAM, NY (03/08/2018) (readMedia)-- The Crane Latin Ensemble at SUNY Potsdam's Crane School of Music will present its first concert of the spring semester on Friday, March 16 at 7:30 p.m. in the Sara M. Snell Music Theater.

The performance will feature three of Washburne's compositions, including "Nuyorican Son," "Land of Nod" and "Blue Gust." The last piece is an interactive video/music collaboration with Crane faculty member and electronic music composer Jerod Sommerfeldt. "Blue Gust" offers a stinging commentary on our social/political world.

Chris Washburne is one of those rare musicians whose musical activities cross many styles and cultural borders. From early in his career, he refused to be pigeon-holed as just being a jazz or classical player, but instead has continually pursued a diverse path. Washburne is currently freelancing as a studio musician and performing trombone, bass trombone, tuba, didjeridu and percussion with various classical, jazz, rock and Latin groups in New York City. He also tours extensively with various groups and has performed throughout North America, Europe, Asia, Africa, South America, Central America and the Caribbean.

Jerod Sommerfeldt's music focuses on the creation of algorithmic and stochastic processes, utilizing the results for both fixed and real-time composition and improvisation. He is a graduate of the University of Wisconsin-La Crosse, the Peck School of the Arts at the University of Wisconsin-Milwaukee, and the College-Conservatory of Music at the University of Cincinnati. His sound world explores digital audio artifacts and the destruction of technology, resulting in work that seeks to question the dichotomy between the intended and unintentional. An active performer as both a soloist and a collaborator in interactive digital music and live video, he currently serves as assistant professor of electronic music composition and theory at SUNY Potsdam's Crane School of Music, and as director of the SUNY Potsdam Electronic Music Studios (PoEMS). He is the author of "Computer Music Composition with RTcmix."

The 25-member Crane Latin Ensemble is led by Dr. Marsha Baxter and Dr. Peter McCoy, reflecting the diverse musical life at SUNY Potsdam's Crane School of Music. North Country Public Radio journalist Todd Moe wrote of the group: "It's dynamic music from a group of talented young people who played their hearts and souls out. I could have grinned all night." This new generation of young performers have shared the stage with the Mambo Legends Orchestra, with whom they have had an ongoing musical partnership since 2010, and last year completed an educational performance tour of Cuba in partnership with the University of Cienfuegos.

Founded in 1886, SUNY Potsdam's Crane School of Music has a long legacy of excellence in music education and performance. Life at Crane includes an incredible array of more than 300 recitals, lectures and concerts presented by faculty, students and guests each year. The Crane School of Music is the State University of New York's only All-Steinway institution. For more information, please visit www.potsdam.edu/crane.