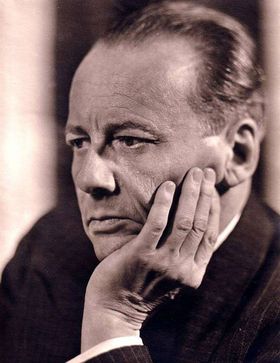 The Crane School of Music at SUNY Potsdam will present a concert celebrating the works of composer Hermann Zilcher (pictured) on Monday, March 12.

This recital of the works of Hermann Zilcher is the result of a study George completed during his sabbatical. Hermann Zilcher (1881-1948) was a German composer, pianist, conductor and music teacher. Although considered by many to be one of the greatest German composers, after World War II, his music was almost forgotten -- but is now experiencing a rebirth.

The concert will feature a brief sampling of Zilcher's vast output, with many works being performed for the very first time in the United States. Most of the pieces involved in this concert will be USA first performances, including Zilcher's "Rokoko Suite," "The Inebriated Astronomers," "The Tragic Adagio," "Variations on a Theme of Mozart" and an excerpt from his German folksong set.

The performance will delve into Zilcher's dedication to the Enlightenment, Mozart, the music of the Rococo, the accordion and his humor, as seen particularly in "The Inebriated Astronomers."

Assistant Professor of Music History Erin Brooks will also take the audience through Zilcher's life, with a lecture and slide presentation.

Donald George has performed at La Scala, the Paris Opera Bastille, Kennedy Center, the State Operas of Berlin, Hamburg and Vienna, the Festivals of Salzburg, Buenos Aires, Jerusalem, Istanbul, Perth and Blossom USA. He has sung with Leonard Bernstein, Vladimir Jurowski and Simone Young, and recorded for Sony, Naxos, Phillips Classic, Teldec, Delos and Bavarian Radio, among others. Reviews speak of his "pleasing tenor sound, vocally reliable in all challenges" (Metropolitan Opera News). His recordings of the songs of Margaret Ruthven Lang (1868-1972), "Love is Everywhere," Volumes I and II, were nominated for Grammy Awards. The review, by Music Web International, of the recording of "Return to Old Ireland" described his singing as "splendid." The Frankfurter Allgemeine Zeitung reviewed his recording of Schubert's "Die Schöne Müllerin," praising it as "a splendid visiting card of his artistry... an absolute must." He is the co-author of the Oxford University Press book "Master Singers: Advice from the Stage," which is becoming a standard work for vocal pedagogy classes. He is a professor of voice at The Crane School of Music.

Founded in 1886, SUNY Potsdam's Crane School of Music has a long legacy of excellence in music education and performance. Life at Crane includes an incredible array of more than 300 recitals, lectures and concerts presented by faculty, students and guests each year. The Crane School of Music is the State University of New York's only All-Steinway institution. To learn more, please visit www.potsdam.edu/crane.