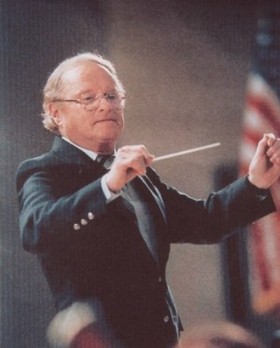 Dr. Robert Washburn conducts a Crane concert in this photo from the College’s archives.

Both an alumnus and a longtime faculty member and dean at The Crane School of Music, Washburn passed away in 2013.

The tribute concert will open with remarks from Dr. Michael Sitton, the current dean of Crane. College Archivist Emerita Jane Gatta Subramanian '72 will then offer a presentation, "Robert Washburn... We Remember," including selected recordings of his compositions performed by Crane ensembles from archival recordings. The concert will feature an array of compositions by Washburn.

The performance will begin with a 1967 piece, "Summer Night," followed by "Three Thoughts from Thoreau," a setting of three poems by Henry David Thoreau composed in 1982. Both works will be presented by the Hosmer Choir, along with soprano Kathleen Miller. The Hosmer Choir is conducted by Jeffrey Francom, and accompanied on piano by Nicholas Roehler.

Washburn's "French Suite" (1980) will be performed by Sasha Shatalova on oboe, Julianne Kirk Doyle on clarinet and Carol Lowe on bassoon.

The Potsdam Brass Quintet will present "Quintet for Brass," a three-movement work written in 1973. The quintet includes John Ellis and James Madeja on trumpet, Kelly Drifmeyer on horn, Mark Hartman on trombone and Charles Guy on tuba.

The concert will conclude with a performance of Washburn's 1965 "Concertino for Woodwind and Brass Quintets." Director of Bands Brian Doyle will conduct Shatalova, Doyle, Lowe, Ellis, Madeja, Drifmeyer, Hartman and Guy, who will all be joined by Kenneth Andrews on flute, and Roy Schaberg on horn.

This event is free, and the public is invited to attend.

This concert will be broadcast live on the SUNY Potsdam website at the performance time. To view the program and see other upcoming streaming performances, visit www.potsdam.edu/academics/Crane/streaming.

Dr. Robert B. Washburn '49 was a beloved member of The Crane School of Music family, from his years as a student, through his tenure as faculty member and dean. He was greatly admired and respected by hundreds of students and faculty members who studied and worked with him throughout his 50-year teaching career. As a composer, he touched many lives with his music, and his work continues to inspire people throughout the world.

Born July 11, 1928 in Bouckville, N.Y., Washburn earned both his bachelor's and master's degrees at The Crane School of Music. Soon after, he enlisted in the U.S. Air Force during the Korean conflict, where he was stationed at the Lackland Air Force Base in San Antonio, Texas. His military service included duty as chief arranger for the Air Force Band of the West and the Air Force Sinfonietta. He spent a year as a member of the San Antonio Symphony. It was there that he met his wife, Beverly J. Darnell, who was also serving in the Air Force at Lackland, and was one of the founding members of the Women's Air Force Band and the ensemble's assistant conductor. They were married in 1952, and had two children, Brooks and Roberta.

Following his military service, Washburn returned to Potsdam, where he joined the Crane faculty at the invitation of Dr. Helen Hosmer in 1954. Washburn was awarded a Danforth Foundation Fellowship to complete a doctorate in composition at the Eastman School of Music, where he worked with Howard Hanson, Bernard Rogers and Alan Hovhaness. He received his Ph.D. in 1960. He went on to follow in Hosmer's footsteps, serving as dean of The Crane School of Music from 1981 to 1985.

His further studies included a summer at the Aspen Music School, where he studied with Darius Milhaud, and a season in Paris with Nadia Boulanger. He also participated in seminars at the Sorbonne in Paris and at the University of Oxford in England. Washburn later received a Ford Foundation Grant, which permitted him to devote a year to composition, and he also received grants from the Rockefeller Foundation, the National Endowment for the Arts, the Juilliard Repertory Project and Meet the Composer. He was a fellow of the MacDowelI Colony and held a scholarship at the Bennington Composers Conference. Subsequently, he was awarded a SUNY Foundation Summer Fellowship to compose a symphony for band.

Other honors included the SUNY Chancellor's Award for Excellence in Teaching, the SUNY Potsdam Alumni Association's Minerva Award and a SUNY Faculty Exchange Scholar appointment. Washburn was also the recipient of many annual awards from the American Society of Composers, Authors and Publishers.

Many orchestras have performed Washburn's works, including the Baltimore, Indianapolis and Vancouver symphonies. He conducted a number of his own works at the Brevard Music Center, where he was composer in-residence. His works have been performed at EXPO 67 in Montreal, at Carnegie Hall, the Kennedy Center and Lincoln Center.

He received a number of commissions, and his works have been heard at music festivals around the nation and overseas. Washburn also performed at the White House, where he was the guest of President John F. Kennedy and First Lady Jacqueline Bouvier Kennedy.

In 1980, Washburn was commissioned to compose music for the opening ceremonies of the Lake Placid Winter Olympics, which were broadcast to millions of viewers worldwide. More than 150 of his compositions have been published, and he wrote articles for many scholarly publications.

In addition to his activities as composer and teacher, Washburn was a specialist in the music of Africa and Asia. He made a number of field study trips to those areas, including a sabbatical leave spent in North Africa and the Middle East, a Fulbright Senior Fellowship in Cairo, Egypt, and an African Comparative Cross Culture Study Program in Senegal, the Ivory Coast, Tanzania and Ethiopia.

In 2007, Dr. and Mrs. Washburn established the Robert and Beverly Washburn Fund, to provide financial assistance to Crane students traveling abroad for an international experience in music.