Debut of the Alex Hazard Show at Cazenovia College 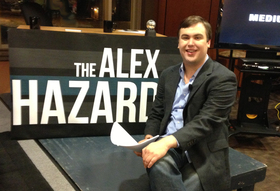 Alex Hazard on the set of his show. Photo by Chaz Bedford, Cazenovia College studio art major, specializing in photography.

CAZENOVIA, NY (04/03/2013)(readMedia)-- Cazenovia College junior, Alex Hazard, is preparing for the big time in show business. Hazard is a communication studies major from Nichols, N.Y., a 2010 graduate of Waverly High School in Waverly, N.Y., who recently debuted his own television show, and now has two episodes posted to YouTube.

The Alex Hazard Show, taped in the Cazenovia College dining hall, aired online for the first time in late February. The second show was produced on March 28. "I didn't advertise the first show," says Hazard. "I wasn't sure how it was going to go. But there was a standing room only audience just from word-of-mouth on campus. The second show had an audience of more than 300.

The show is designed to build Hazard's professional portfolio. "When I did my internship on the David Letterman Show, I realized that I needed to build a library of my work. I plan to include elements of every variety of talk show: an opening monologue, a morning style segment similar to Kelly and Regis, a late show type interview, and Saturday Night Live style skit."

He also plans to draw all kinds of talent from the Cazenovia student body, including musicians, singers and comedians. "We have an amazing pool of talent right here on campus," he says. "I'll have a different co-host, usually another communication studies student, for every show, and draw on student talent for skits and other portions of the show."

"I'm fortunate that Cazenovia has a plethora of top-of-the-line technical equipment in various departments, including cameras and professional sound equipment from the Information, Communication and Technology Department; lighting from the photography department; and editing software in our visual communications computer labs. In addition, my Senior Capstone advisor, Dr. Andrew O'Baoill, (assistant professor of communications) is always available by phone if I get stuck on something."

O'Baoill says, "It's a pleasure to work with a student with Alex's drive and ambition. He has used his internship opportunities not only to develop his practical skills, but to deepen his understanding of the industry in which he wants to work. I'm glad we are able to support his latest project with the A/V resources we've been developing in recent years."

Hazard does the writing and editing, acts as production manager, and directs the show. "I wear all those hats," he says, "so I'm very thankful for my production crew. And because I also have five classes this semester, I'm only planning one show a month. Of course, I can throw in an extra one every now and then if the right opportunities come up."

Hazard's main guest on his first show was the Honorable Bernadette Clark, a judge on the New York State Supreme Court. During her six-minute interview, she urged students never to give up on a dream. The second show, posted to YouTube just days ago, featured a local psychic, and a student singer who has more than 10,000 views on YouTube, but had never performed before a live audience. For future shows, Hazard hopes to feature College trustees, major donors and alumni. He says, "There are so many people who have a lot to do with the College; I think my show can help them realize how much they play a part in the success of students like me."

In addition to his classes and his television show, Hazard will be hosting the Cazenovia College 40th Anniversary Fashion Show, Recollection, at the Turning Stone Resort in Verona, N.Y., on April 21. He says, "I've always thought the Communications Program should be involved in the show," he says. "I met with the students who are producing the show, and here I am, the first student host!"

Episodes 1 and 2 of The Alex Hazard Show are on YouTube: www.youtube.com/watch?v=R5O0_94OGDs and http://youtu.be/BuUQNAU8kqU.