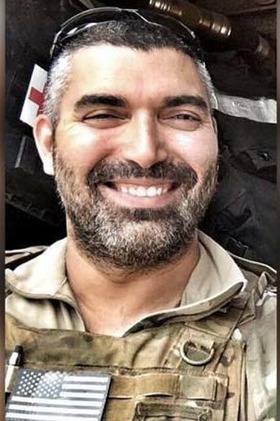 The four New York Air National Guard Airmen were part of a seven-member team who died when the HH-60G Pave Hawk rescue helicopter they were flying crashed near the city of Al-Qa'im in western Iraq. There is no evidence of enemy action involved in the crash and the incident is under investigation, according to the Department of Defense.

• Capt. Christopher Zanetis,(za-NEH-tis), age 37, a resident of Long Island City, N.Y., who was an HH-60G Pave Hawk pilot. He joined the 106th Rescue Wing in 2008 and was assigned to the wing's 101st Rescue Squadron. Zanetis was a member of the New York City Fire Department in civilian life and had recently joined the law firm of Debevoise & Plimpton in New York City as an associate. He previously deployed to Iraq in 2011, supporting another HH-60G squadron, and Afghanistan with the 101st.

• Capt. Andreas O'Keeffe, age 37, a resident of Center Moriches, N.Y., who was an HH-60G Pave Hawk pilot. He was a full-time federal civilian employee and an Air Guardsman with the wing's 101st Rescue Squadron. He joined the 106th Rescue Wing in 2013, after serving as an armament systems specialist with the 113th Wing, District of Columbia Air National Guard, and RC-26 pilot with the 174th Attack Wing, Hancock Field Air National Guard Base, Syracuse, N.Y. He deployed to Iraq three times, and to Afghanistan, the Horn of Africa, and Texas during Hurricane Harvey.

• Master Sgt. Christopher Raguso,(ra-GOO-so), age 39, a resident of Commack, N.Y., who was an HH-60G special missions aviation flight engineer. He joined the 106th Rescue Wing in 2001 and was a member of the New York City Fire Department. He was assigned to the wing's 101st Rescue Squadron. He previously deployed to Iraq as a fire protection specialist with the 106th Civil Engineering Squadron, twice to Afghanistan with the 101st, once to the Horn of Africa, and to Texas and the Caribbean for Hurricanes Harvey and Irma.

• Staff Sgt. Dashan Briggs, age 30, a resident of Port Jefferson Station, N.Y., who was an HH-60G special missions aviation flight engineer. He joined the 106th Rescue Wing in 2010. He was a full time military member with the wing and assigned to the 101st Rescue Squadron. He previously deployed to Afghanistan as a munitions system specialist with the 106th Maintenance Group, and to Texas and the Caribbean for Hurricanes Harvey and Irma as a member of the 101st.

"It is with great sadness that I report the loss of four of our wing members," said Col. Michael Bank, the commander of the 106th Rescue Wing.

"All four of these heroes served their nation and community. Our sincerest condolences and sympathies to the families and friends that have been touched by this tragic event," Bank added.

"Our National Guard family mourns the loss of the seven combat search and rescue Airmen in the HH-60 crash, including four members from the 106th Rescue Wing," said Major General Anthony German, the Adjutant General of New York. "This loss reminds us of the tremendous risks we take in serving our nation every day."

"We honor their service, their professionalism, and their sacrifice as we mourn their loss," German added.

Airmen from the 106th Rescue Wing have deployed regularly to Afghanistan and Iraq and other areas in support of American and coalition combat missions since Sept. 11, 2001.

Airmen from the wing also recently responded to Hurricane Harvey in Texas and Hurricane Irma in Puerto Rico and the Virgin Islands in 2017. The members of the 106th are credited with rescuing 546 Houston area residents from flood waters with boats and their HH-60 Pave Hawks. They played a key role in evacuating 1,500 Americans from the Dutch Island of St. Maarten following Hurricane Irma.

The four Airmen killed on March 15 brings the total number of New York National Guard members who have died in a combat zone since Sept. 11, 2001 to 39. Of those, seven have been members of the New York Air National Guard.

Staff Sgt. Todd J. Lobraico Jr., a member of the 105th Airlift Wing's 105th Base Defense Squadron was killed while operating in the vicinity of Bagram Air Base on Sept. 3, 2013.

On Dec. 21, 2015 Tech Sgt. Joseph G. Lemm and Staff Sgt. Louis Michael Bonacasa died when a suicide bomber attacked their patrol in a village outside Bagram Air Base in Parwan Province. Both Airmen were also members of the 105th Airlift Wing's 105th Base Defense Squadron.