Deploying During the COVID-19 Pandemic, from Maine to Africa 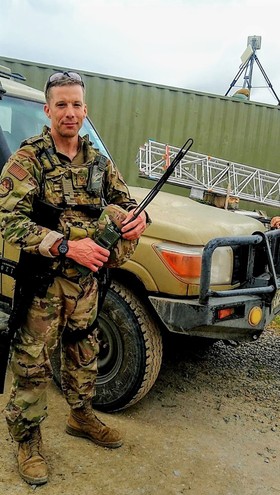 AUGUSTA, ME (08/12/2020) (readMedia)-- The Maine Air National Guard supports all types of missions across the globe, enduring various conditions that its members prepare for during extensive training and planning.

When the COVID-19 pandemic struck, 265th Combat Communications Squadron Airmen had to adapt to new guidelines and restrictions as they embarked on a deployment to Camp Simba in Kenya. They would be one of the first U.S. military groups to deploy following the stop movement order imposed in March.

In early spring, about a dozen members of the South Portland Air National Guard Station's 265 CBCS departed Maine in an unorthodox manner. The Airmen and their families gathered in the Portland International Jetport's cell phone lot, along with several other visitors seeing the group off for their roughly six-month deployment.

"Our families saw us off there so that we wouldn't all be crowded into the terminal," said Staff Sgt. Michael D. Wallace, a radio frequency transmission technician from Westbrook. "At each step of our travel we had 'Restriction in Movement' and periods of quarantine."

The Airmen deployed to provide a variety of communication support operations, including setting up satellite communications, maintaining the local network, and ensuring radio aircraft are properly operating. They serve as the installation's primary communications resource while working with other military components.

On their way to Kenya, the Airmen made several stops and transferred to military aircraft.

"We were the first U.S. military aircraft to land in Germany after COVID-19 broke," recalled Wallace.

As the group traveled into Africa, they were screened and tested for COVID-19 at every location before arriving at Camp Simba.

"When we landed, we were handed a specific type of surgical mask as a request from the Kenyan government," said Wallace. "We then had an initial 14-day restriction to certain parts of camp. After that, we [made] sure we had our face masks on when we are near others, as well wash our hands frequently at the handwashing stations they have all around camp."

After Wallace and the others from the 265th CBCS settled in, the group worked around the clock supporting operations. The Maine Airmen have had the opportunity to interact with other Airmen from around the world and are getting to know them better. Wallace commented that there are many shared activities including movie night and volleyball Tuesdays.

Wallace also said the wildlife is also spectacular, with monkeys and baboons by the hundreds right outside the gate, and plenty of lizards and snake inside the camp. He was even told by others who have been at the camp longer about lion and hippo sightings.

"My son, Samuel, is 9 years old and I'm sure he thinks I'm here on a National Geographic expedition," said Wallace. "Wildlife around here is a big topic of our conversations when I have a chance to talk with him."

Almost three weeks into their deployment, Samuel broke his leg in a bike-riding accident that required surgery at Maine Medical Center. Wallace was 8,000 miles away. The anxiety of the accident combined with the concerns over to COVID-19 weighed heavy on Wallace's mind.

"He's recovering well now, but you feel like your mind is always in two places when something like that is happening back home," said Wallace. "Something you put in the back of your mind is that life still happens for you and your loved ones when you're deployed. Life is unpredictable."

While the state continues to face challenges associated with the pandemic, it is important to remember the men and women from Maine who are serving all over the globe. They are focused on their mission, but they are also faced with this new threat to their families and friends back home.

Staff Sgt. Michael D. Wallce, of Westbrook, deployed with about a dozen other members of Maine Air National Guard's 265th Combat Communications Squadron in the spring to Camp Simba in Kenya. They were one of the first U.S. military groups to deploy following the stop movement order imposed in March for COVID-19. The Airmen deployed to provide a variety of communication support operation, serving as Camp Simba's primary communications resource. (Air National Guard Photo)