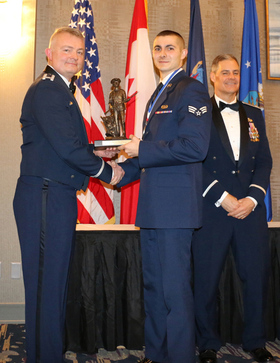 ROME, NY (01/30/2018) (readMedia)-- Five Airmen and one civilian were recognized for outstanding service during 2017 at the Eastern Air Defense Sector and 224th Air Defense Group's annual dinner on Jan. 20.

"This year's winners distinguished themselves by going above and beyond our high standards. I congratulate them on their outstanding accomplishments and thank them for their efforts, "Filkorn said.

• 1st Lt. Eric Schenck, Liverpool, Outstanding Company Grade Officer. Schenck spearheaded planning for more than 30 Presidential movements, briefing and coordinating with more than 150 fighter and tanker aircraft. An air weapons officer with the 224th Air Defense Squadron, Schenck restructured the weapons and tactics library used by more than 300 personnel and served as a lead designer for a critical cruise missile defense exercise. He was also recognized as a superior performer at the annual Virtual Flag exercise.

• Mr. Sonepith Keoviengsamay, Rome, Outstanding Civilian. An information technology specialist with the 224th Support Squadron, Keoviengsamay engineered a technical fix for a classified computer system that saved an estimated $550,000. He oversaw the separation of live and training missions on the operations floor, a project that required re-configuring of dozens of positions and more than 80 computer terminals. Keoviengsamay also established improved operational security guidelines with more than 40 new security controls.

Photographs of the awardees can be seen here: