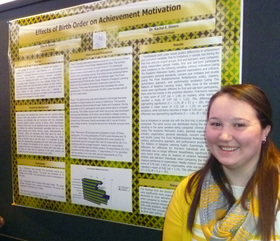 CAZENOVIA, NY (04/02/2013)(readMedia)-- Elise Russell, of Whitesboro, N.Y., was among seven Cazenovia College psychology majors to have a poster presentation accepted at the recent Eastern Psychological Associations' 84th Annual Meeting in New York City in early March. Russell will graduate in May 2013, and plans earn a certificate of advances study in school psychology, with the intention of becoming an elementary school counselor.

Dr. Rachel Dinero, assistant professor of psychology at Cazenovia College, says that ten of her 19 seniors chose to collect data for their capstone projects and the seven who submitted their research were all accepted to present. At the conference, she says, "They each spoke knowledgeably about their work and had a great deal of interest from student and faculty conference attendees. I think the individual attention these students receive in both the Research Methods and Capstone classes facilitates their success with independent research. I am extremely passionate about research and make every effort to encourage students to conduct their own research."

Russell was introduced to the birth order ideas of Alfred Adler in her Theories of Personality class. She says, "I thought it might be interesting to attempt to test some of his theories for my senior capstone.

I wanted to assess whether an individual's birth order influences their achievement motivation."

She says, "My results backed up Adler's findings and when Dr. Dinero suggested that I could incorporate the achievement motivation aspect of my research into my capstone, the project really came together. I found that older siblings tend to be leaders and the youngest tend to be more organized than middle children. I was surprised that there were no gender differences – the differences were truly based on birth order positioning."

She continues, "I will be attending SUNY Albany for graduate study in the fall. The opportunities available to students who have experience in conducting research appear to outnumber the opportunities for those that do not possess the knowledge."

There were more than 100 posters presented by students from many colleges and universities in the eastern United States. Conference attendees roamed the corridors of the exhibition hall to study the posters and ask questions of the researchers. Russell noted that she and her classmates had an opportunity to look at research done by other students on many different subjects. "The posters were a chance to see what other students are doing and to share their knowledge," she says.