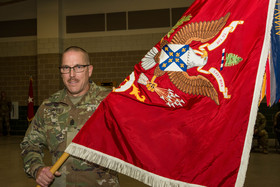 Both Graves and Williams have an extensive history of working with the 133rd Engineer Battalion.

"Working with all these fine soldiers has allowed me an opportunity to get to know a lot of great leaders in this organization that I hope to get the pleasure to serve with you again in the future," said Williams. "The staff within this battalion are bar none some of the best in the state. A battalion command team cannot be successful without a talented team, and we have some of the best."

"The camaraderie and esprit de corps in this battalion are unlike anything else," said Williams. "Having been the CSM for this battalion and serving with you all has truly been an honor."

Graves enlisted in the Army in 1991 and transferred to the Maine Army National Guard in 1998, serving as a driver for the 133rd's Headquarters and Support Company. His service in the 133rd includes time as a heavy equipment operator, team leader, squad leader, platoon sergeant, and operations sergeant. Graves deployed to Iraq in 2004 and 2013 with the 133rd, and has served as first sergeant for both the 133rd's Headquarters and Headquarters Company in Brunswick and the 136th Engineer Company out of Lewiston and Skowhegan.

"Thank you CSM Williams," said Graves. "Be assured that I will do my best to protect, serve, and guide all of these soldiers for a successful future in the Maine Army National Guard and the continued legacy of the 133rd Engineer Battalion."

Graves holds a bachelor's degree in science from Southern New Hampshire University. He and his wife, Shunna, reside in Brunswick and have two children, Haylee and Tristan.

Williams holds a bachelor's degree in business management from the University of Maine at Augusta. He and his wife, Danyl, reside in Jefferson and have five children: Ethan, Gavan, Alpha, Tessa and Lydia.