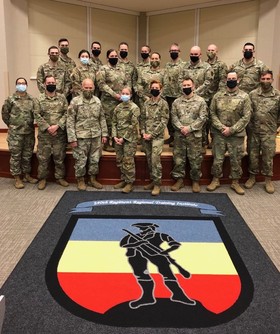 The EOL course teaches how to recognize issues of discrimination and/or harassment, and how to train and educate fellow soldiers on these issues. It also covers the role of an EOL in supporting commanders and fellow soldiers, as well as responding to complaints of inappropriate behavior.

The goal of equal opportunity (EO) programs is to ensure all military members are afforded an opportunity to succeed in an environment free from discrimination on a basis of race, color, national origin, religion, sex (including gender identity) sexual orientation, and free from sexual harassment.

Nineteen soldiers from various units across Maine attended the training. Maj. Ana Silva, a Defense Equal Opportunity Management Institute (DEOMI) certified instructor from the Massachusetts Army National Guard taught the course. A few soldiers will go on to the equal opportunity advisor course (EOA), the next level of training.

"I've been an EOL for about 8 years now," said Chief Warrant Officer 2 Jennifer Paradis, who originally attended the course while deployed to Afghanistan in 2013. "There have been a lot of changes over the years and this course included content from the newest regulation update. Maj. Silva ran us through a number of hands-on exercises and discussion groups on real life discrimination and harassment issues across the country."

"Our people are our most valuable resource and that's what the EO program is about at its core - people," said Maj. Gen. Douglas Farnham, Maine's adjutant general. "Mutual respect for everyone in uniform is the foundation of this program, and we know that success in the EO arena pays dividends in teamwork and mission accomplishment. Our sincere thanks to these soldiers for taking on this additional responsibility to continue to improve their units."

"This is relevant, real-world training that forces you to do a bit of introspection into our own professionalism, the professionalism of other soldiers we've served with, and it was also a great opportunity to get to know soldiers assigned in the same role for other units across the state," Paradis continued.

The 240th is one of many Army National Guard-owned training institutes across the country. Among varying course offerings, the 240th is known for their instructor courses, as well as their carpentry/masonry course, qualifying soldiers for the 12W, or "twelve whiskey" military occupational specialty.