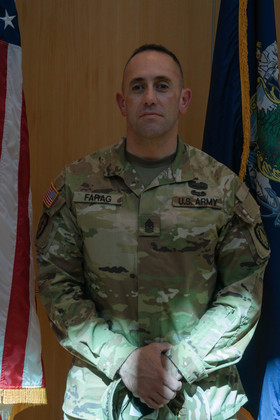 BRUNSWICK, MAINE (09/14/2021) (readMedia)-- Command Sgt. Maj. Kameel Farag was promoted to his current rank from master sergeant at the Brunswick armory on September 11, 2021, in front of an audience of family, friends, veterans and fellow soldiers. His parents Mo and Marge, his daughters Liv and Emma, and nephew Cameron were by his side to replace the pin on his patrol cap and rank patch on his uniform.

Farag, a legacy combat and construction engineer, enlisted in the Maine Army National Guard in 1998.

"I believed in service," said Farag. "The National Guard just felt like a good fit. I had an amazing recruiter, Sgt. 1st Class (ret.) Slater Claudel, who was the first noncommissioned officer (NCO) I was exposed to. He was honest and caring, and prepared me for what to expect."

Throughout his lengthy career, Farag has served in the position of team leader, squad leader, platoon sergeant and first sergeant. He served in an Active Guard and Reserve (AGR) status for several units as an administrative NCO, training NCO, readiness NCO, and as both battalion and brigade operations NCO. He also deployed twice with the 133rd Engineer Battalion, to Iraq in 2004-2005, and to Afghanistan in 2013-2014.

His next assignment is as the command sergeant major of the Maine Army National Guard Recruiting and Retention Battalion (RRB).

"I'm also incredibly excited. The RRB has some of the finest NCOs and officers in both recruiting and staff roles. I bring a unit/battalion/brigade level of experience set to this role that I believe will help round out the already fantastic team that is in place."

Farag said he hopes to continue the momentum that has been picking up in RRB over the last couple of years.

"The Maine National Guard is an exceptional organization," said Farag. "It can help people achieve goals that they might not have been able to before. The ability to serve part time or in varying full time statuses, attend college for free, and learn or hone skills that will help in any facet of life is unparalleled."

"I joined the military as an E1, and it was a little over 23 years ago. I've been so lucky to have some amazing leaders, mentors and friends in this organization," said Farag. "The reality is we don't succeed in this organization without our peers, our subordinates, our superiors and the lessons we learn from each other."

"He joined a couple years ago and is blazing his path there and enjoying it," said Farag. "He is already air assault qualified and went with the unit to DC this last January in support of the inauguration response."

Farag encourages anyone who is interested to learn more about joining Maine's ranks.

"Do it! Bring a friend or two with you," said Farag. "Seriously, the pride in service that you give to the great state of Maine and the greatest nation on the planet should guide you. There are a plethora of benefits and opportunities that you can take advantage of along the way. You'll also meet people from every walk of life, profession, and personality."