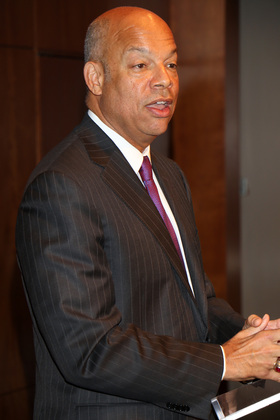 ALBANY, NY (04/25/2017) (readMedia)-- Jeh Johnson, a partner with the law firm Paul, Weiss in New York City, has been recognized with the 2017 Honorable George Bundy Smith Pioneer Award, given by the Commercial and Federal Litigation Section of the New York State Bar Association.

He is the immediate past secretary of the U.S. Department of Homeland Security, the first African American to serve in that position. His service to the New York legal and civic communities is also extensive, as he has been a trustee, director or governor for, among other institutions, the Legal Aid Society, New York Community Trust, Fund for Modern Courts, and Lawyers' Committee for Civil Rights Under Law.

"Jeh Johnson's career accomplishments exemplify those of The Hon. George Bundy Smith's in the areas of legal excellence, community involvement and mentoring, which are the hallmarks of the section's Pioneer Award," said Mark Berman (Ganfer & Shore), chair of the Commercial and Federal Litigation Section.

The award is named for former Court of Appeals Associate Judge George Bundy Smith, who, in 2007, was the first recipient of the award. Johnson received the award April 24 at the section's "Smooth Moves 2017: Career Strategies for Attorneys of Color" event at the Lincoln Center for the Performing Arts in Manhattan.

In his legal practice, Johnson, among other things, advises clients on crisis management, government and internal investigations, and legal aspects of cybersecurity.

Earlier, Johnson served under President Obama as general counsel of the U.S. Department of Defense, where he oversaw legal aspects of the military's counterterrorism missions and was responsible for the prior legal approval of military operations authorized by the president and the secretary of defense.

Johnson also has served as general counsel of the U.S. Air Force and as an assistant U.S. attorney for the Southern District of New York.

The 72,000-member New York State Bar Association is the largest voluntary state bar association in the nation. It was founded in 1876.