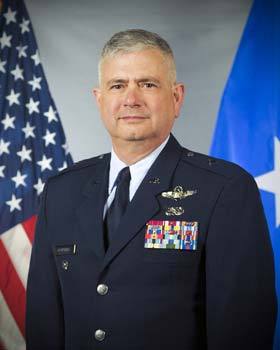 Members of the press are invited to cover the retirement ceremony.

WHAT: Retirement after 38-years of service as a member of the Air National Guard.

Members of the press will be able to get still and video imagery of the retirement ceremony and interview Brig. Gen. Clouthier about his career.

For access to this secure military facility members of the media must call Senior Master Sgt. William Gizara at 518-248-3799.

Brig. Gen. Shaw Clouthier earned his commission through the Academy of Military Science at McGhee-Tyson Air National Guard base in 1982. That same year, Clouthier attended Undergraduate Navigator Training and was assigned to the 139th Tactical Airlift Squadron of the 109th Airlift Wing at Stratton Air National Guard Base.

In 1993 Clouthier became a LC-130 Navigator, advancing to positions of Instructor and Evaluator by 1999. He went on to graduate Maintenance Officer School in 2007, quickly advancing to 109th Maintenance Group commander by May 2011. Clouthier became the 109th Operations Group commander in August 2011 and took Command of 109th Airlift Wing May 2012. He served in that position until 2017 when he moved to Joint Force Headquarters.

He is a Master navigator with over 7,000 flying hours.

Clouthier holds an Associate of Applied Science from Herkimer County Community College and a Bachelor of General Studies from the State University of New York Regents College.

He is a graduate of the Air War College, the National Security Management Course and the Joint Task Force Commander Course.

The Air National Guard has two wings-the 107th and 174th Attack Wing-- which operate the MQ-9 remotely piloted aircraft, flying mission on guard above American service members on the ground from locations in Niagara Falls and Buffalo. The 106th Rescue Wing at Westhampton Beach on Long Island is one of three rescue wings in the Air National Guard.

The 105th Airlift Wing at Stewart Air National Guard Base in Newburgh flies the C-17 strategic airlifter hauling important cargo and personnel around the world on a regular basis, while the 109th Airlift Wing flies ski-equipped LC-130 aircraft and specializes in operations in Antarctica, Greenland and the Arctic.

The Eastern Air Defense Sector in Rome is responsible for the air defense of the United States east of the Mississippi.