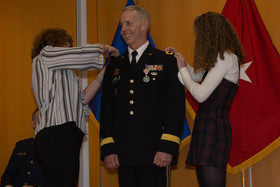 AUGUSTA, MAINE (03/02/2019) (readMedia)-- The Adjutant General for Maine, Maj. Gen. Douglas A. Farnham, has named Brig. Gen. Donald O. Lagace Jr. as the next Assistant Adjutant General-Army of the Maine National Guard. In this position, Lagace will be responsible for all training, manning and equipping of Army forces in order to ensure operational requirements and readiness goals are properly met. Lagace was promoted from colonel to brigadier general in a 3 p.m. ceremony on March 1, and conducted his official transfer of authority ceremony with Brig. Gen. Hugh Corbett on March 2, both in front of an audience of family, friends and National Guard members. For the past 10 years, Lagace has served as the United States Property and Fiscal Officer for Maine, a federal position reporting directly to the chief of the National Guard Bureau, ensuring the proper obligation and expenditure of federal funds and safeguarding all federal property held by the Maine National Guard. A logistics officer and a Persian Gulf War veteran, Lagace began his military career as an enlisted Soldier in 1982 and was commissioned through the ROTC program at the University of Southern Maine in 1984. He has commanded at the company, battalion and brigade levels during his 37 year Army career. During his promotion ceremony remarks, Lagace thanked his family, friends and fellow Soldiers for the support and mentorship provided to him during his career. He emphasized the importance of family, and how the close ties he has formed through many years of training and deploying has made his military experience a fulfilling one. Lagace highlighted serving with his father, a former chief warrant officer in the "Mighty 152," or 152nd Maintenance Company, which Lagace later commanded as a captain. He also thanked the chaplain corps for their diligent work in attending to service members' spiritual needs, and emphasized the National Guard's community roots as one of its unique strengths. Lagace holds a bachelor's degree in business administration from the University of Southern Maine, as well as a master's degree in strategic studies from the Army War College in Carlisle, Pennsylvania. His awards and decorations include the Defense Meritorious Service Medal, Meritorious Service Medal, and Army Commendation Medal.
Posted Saturday March 02, 2019 at 06:36 pm by Maine National Guard