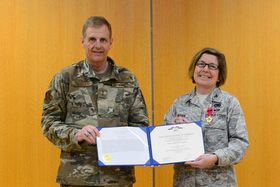 AUGUSTA, MAINE (03/15/2019) (readMedia)-- The Adjutant General, Maj. Gen. Douglas A. Farnham, presented Col. Brenda Jordan with the Legion of Merit at an award ceremony held March 2, 2019, at Joint Force Headquarters, Camp Chamberlain. From May 1, 2014, to July 31, 2018, Jordan served as the mission support group commander of the 101st Air Refueling Wing in Bangor, Maine, where she oversaw the servicing of over 4,600 aircraft and the processing of 27.5 million gallons of fuel, while simultaneously managing more than 1,200 individual deployments and redeployments in support of state and federal missions. Under her leadership, the 101st Mission Support Group received excellent ratings for their nuclear operational readiness inspection and a "mission effective" rating for the wing's unit effectiveness inspection, despite a high operations tempo and steady stream of deployments. Jordan also led an era of financial and budget innovations, executing over $4 million in cooperative agreements, and helping to ensure that zero-based budgeting was instituted for wing and maintenance appropriations. "Col. Jordan spent many years leading the mission support group, first as the deputy and then as the commander. Her leadership and commitment to the organization have been integral to the success of the unit," Farnham said. "I am so glad that would could acknowledge that with an award of this type." Jordan left the 101st MSG in July 2018 to accept the position of chief of staff, joint staff of the Maine National Guard at Camp Chamberlain. Jordan's parents were in the audience, along with friends and colleagues from Joint Force Headquarters and the 101st ARW who gathered to support her as she received this prestigious honor. "I really want to say 'thank you', because four and a half year in command isn't successful without each and every one of you – commanders, first sergeants, and chiefs - stepping up and saying 'I'll do this difficult job' and carry that vision forward at the squadron and flight level," Jordan said. "I look forward to this new challenge, new relationships, and moving forward in the joint environment." The Legion of Merit was established by an Act of Congress of July 20, 1942, and is conferred on officers and enlisted service members of the armed forces of the United States who have distinguished themselves by exceptionally meritorious conduct in the performance of outstanding services.
Posted Friday March 15, 2019 at 08:41 am by Maine National Guard