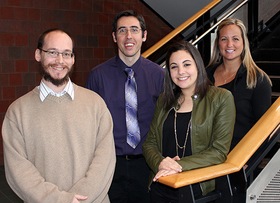 BATAVIA, NY (12/19/2013)(readMedia)-- Genesee Community College is pleased to announce the collaborative effort of four college staff members has earned them recognition as December 2013 Employees of the Month. Patrick Collette, Tom Kinsey, Christie Shirk and Jackie Vetrano worked together to develop a new recruiting tool, the online InfoPacket for the College website. In naming them Employees of the Month, the College commended their initiative and collaboration. "It is a real testament to the type of teamwork that sets Genesee Community College apart from many of its peers."

Patrick Collette is the College's principal web specialist, overseeing web projects, content strategy, content management, user experience and emerging internet trends. He handles front-end design work for GCC websites as well as back-end programming and application development. He's been with the College for more than ten years. The College Admissions site he developed earned national recognition, and the current homepage was presented as one of the best in SUNY. He finds the best part of working at GCC is "The awesome people I get to work with." Pat earned Bachelor's Degrees in Biochemistry and Psychology from SUNY Geneseo. He lives in Batavia with his wife Katie and children Molly and Miles. Outside of work, he's an avid do-it-yourselfer and musician. He writes and records music and plays in a Barenaked Ladies tribute band, Fully Clothed Gents.

Tom Kinsey works in the admissions department mining data and adapting software programs that help with all recruitment efforts. He earned both Bachelor's and Master's Degrees from The College at Brockport and was a substitute teacher in the Brockport and LeRoy School Districts. He came to GCC more than five years ago from Finger Lakes Community College, where he was an adjunct instructor of English. He says his favorite aspect of GCC is "working with highly intelligent and highly creative people!" Tom lives in Batavia and, outside of work, enjoys spending time with his wife Jodie and their son Nathaniel, as well as reading, writing and learning computer programming languages.

Christie Shirk develops recruitment publications and communications material for the admissions department. She's been with GCC for three years. Prior to her time at the College, she was a graphic designer for Lazer in East Aurora, NY, designed gift packaging for Pavilion Gift Company and worked for the Home Shopping Network in Florida. She earned Bachelor's Degrees in Graphic Design and Public Relations from SUNY Oswego and is working toward a Master's Degree in Communication from Southern New Hampshire University. She also enjoys her co-workers at GCC. "Everyone is so friendly and always willing to help." The daughter of Rick and Nancy Hale, Christie recently married Nathan Shirk. They live in Batavia. Outside of work, she enjoys painting and design work and supports ocean conservation as a member of Oceana.org.

Jackie Vetrano joined GCC six months ago as its web and social media coordinator, following graduation from SUNY Geneseo with a Bachelor's Degree in Media and Graphic Production. Her experience working in residence life at Geneseo led her to pursue a career in higher education. At GCC, she maintains the College's presence online through social media and the website. She also investigates new forms of media and student engagement, and assists with other initiatives in the marketing communications department. She is active in professional organizations and recently presented at Higher Ed Experts Social Media Conference. A native of Williamsville, Jackie is the daughter of Michael and Lynda Vetrano and has one sister, Melissa. She enjoys running and photography outside of work. Though she's only been with GCC a short time, she's found a welcoming environment. "I love the support I've been given from many people across multiple departments!"

Genesee Community College is also pleased to announce Emmeline Vacanti has been named the December 2013 Student of the Month. A 2011 graduate of Alexander Central School, Emmeline is a Teacher Education major at GCC. Her dream job is to be an elementary school teacher.

Emmeline is described as "an outstanding role model for all" who brings a positive attitude to everything she does. A President's List student, Emmeline is also active as a member of Phi Theta Kappa and the Education Club. She's participated in the club's many service-learning projects and has attended numerous professional development workshops. It's one of the things she loves about GCC. "All of the diverse opportunities including numerous clubs and studying abroad."

In the spring Emmeline will participate in the Disney College Program. She plans to continue her studies next fall at Nazareth College. Emmeline has the character, passion and commitment needed to become an excellent teacher.

Emmeline is the daughter of Michael and Peggy Vacanti and has two siblings, Eliza and Ben.

A photograph of Patrick Collette, Thomas Kinsey, Christie Shirk, and Jackie Vetrano is available at:

A photograph of Emmeline Vacanti is available at: