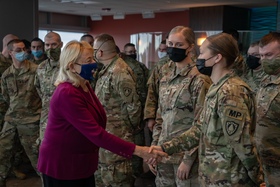 PORTLAND, MAINE (10/04/2021) (readMedia)-- Governor Janet Mills and Commissioner of the Maine Department of Defense, Veterans and Emergency Management Major General Douglas Farnham today thanked the 488th Military Police Company for their service and wished them a safe deployment to the Southwest border.

The unit's approximately 120 service members, who are deploying under federal Title 10 mobilization orders, departed Maine today to provide support to U.S. Customs and Border Protection (CBP). The Governor and Adjutant General saw them off at the Portland International Jetport.

"Throughout our history, dedicated members of Maine's armed services have answered the call of duty, deploying to places near and far to serve our state and nation," said Governor Mills. "On behalf of Maine people, I offer our thanks to the 488th for again stepping up to serve. We wish you a safe deployment and look forward to welcoming you home."

Members of the 488th were on standby near the Maine State House at the time of the Inauguration in January and also provided protection to the U.S. Capitol for several weeks after the inaugural events. Now tasked with their third mission in 2021, which will last one year, the 488th will be primarily monitoring mobile and remote video surveillance camera systems to provide real-time situational awareness to CBP agents.

This is a federal Title 10 unit mobilization under the direction of the U.S. Department of Defense. The 262nd Engineer Company has been conducting a similar mission on the Southwest border since this time last year. That mission will conclude this fall.

"From regular operations and COVID response here in Maine, to domestic support in Washington, to overseas support in Africa, and now a continuation of the Southwest border mission, our soldiers and airmen are always willing to serve." said Maj. Gen. Farnham. "We are proud of the National Guard's ability to respond to varying missions, which would not be possible without the support of family members, friends, and the flexibility of employers across the State of Maine."

All inquiries regarding the unit's service on the border, or overall National Guard support on the Southwest border can be directed to the Joint Task Force - North media desk: n-nc-bliss.jtf-n.mbx.public-affairs@mail.mil