Guardsmen recognized in joint ceremony at the Blaine House 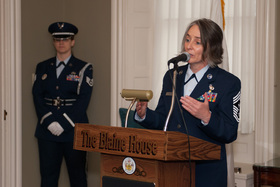 During the ceremony, Governor LePage commented on the selfless service and sacrifice made by the men and women who wear the uniform and their families back home.

"Our nation owes our service men and women a debt that we will never be able to repay," said LePage. "We are honored to show our gratitude today and every day to those who dedicate their lives to serving our great nation. You are the ones who courageously vow to protect our American values and the freedoms we share. We, too, thank the families who are sacrificing, as well. You are the reason these men and women are able to carry out their duty knowing they have your support at home."

Sunday's ceremony was an exciting opportunity to recognize both the Maine Air and Army National Guard's outstanding service member at the same time.

"We have almost 3,100 Airmen and Soldiers here in the state of Maine and I am proud to represent all of them," said Farnham. "Every year we get to honor the eight [service members] that are the most outstanding, so your performance makes us all a little more proud to put on the uniform. It's an honor well deserved."

"It is a big honor to be here today," said Master Sgt. Brian Ward, one of the awardees. "This is an individual award, but the way I look at it, I wouldn't be here today without all of the support from past and present members of the Guard that I have served with".

The Best Warrior represents the top junior enlisted member and top non-commissioned officer from the Maine Army National Guard that are both tactically and technically proficient. Each unit within the state sends a junior enlisted member and Non-Commissioned Officer to compete at the Battalion level, with the winners sent to the brigade level and finally to the state level competition. This year's grueling best warrior competition conducted a modified physical fitness test featuring timed pushups, situps and a 3 mile run, a formal interview board to test each candidate's knowledge, day and night land navigation, timed ruck march with prescribed packing list, medical aid tasks, as well as a series of communications and marksmanship tasks. Each event is assigned a certain amount of points with the winners earning the most points.

This year's Best Warriors: Sgt. Jared Smith and Spc. Joseph Smith were recognized for winning the Best Warrior Competition at the state level.

"Anytime you win an individual award in the military, it's usually based on a collective effort of those leaders who trained you, other soldiers who have trained with you and helped turn you into the soldier you are," said Army Sgt. Jared Smith. "So I think anytime you win an individual award, it is similar to winning an award for your entire unit."

State Command Sgt. Maj. Scott Doyon said that this event was part of an increasing effort to have more joint operations and training with the Air and Army National Guard.

"Cross talking between the two organizations is very helpful," he said. "This will make our people better. They can cross talk and become more effective."

While the criteria for the Air and Army National Guard are different, the outcome is the same: The Maine National Guard recognized the best of the best among its enlisted ranks, which promotes professional growth, friendly competition and e 'spirit des corps.