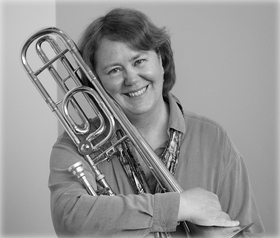 Conant will act, sing and play the trombone in William Osborne's "Aletheia," a completely unique 2017 piece accompanied by computer-controlled piano and quadraphonic electronics. The guest artist is currently completing a 28-city tour across the United States to present the work.

In addition to composing the piece, Osborne also wrote the text and designed the set and lighting and provided all stage directions for the work.

"Aletheia" depicts an opera singer who is preparing to leave to perform for a gala in Detroit, Mich., and follows her actions and emotions as she looks down on the patrons in the courtyard below, and the rusting city beyond. As she contemplates her life, she realizes she is trapped in an "iron maiden" cage.

This concert is free, and the public is invited to attend. This performance was made possible thanks to support from the Crane Student Association and the College's Women's and Gender Studies Program.

Abbie Conant's struggles against sexism in the orchestral world have become legendary. The story of her epic fight and ultimate victory against egregious gender discrimination in the Munich Philharmonic Orchestra, in which she won the position of principal trombone following a screened audition in 1980, inspired writings in publications ranging from the Washington Post to Malcolm Gladwell's book, "Blink." It was also presented in a documentary film broadcast nationally on German national television. After attending the Interlochen Arts Academy for three years, she received her Bachelor of Music degree from Temple University, and her master's degree at Juilliard. In addition, she holds an Artist Diploma from the Cologne University of Music. From there, she won her first position as principal trombone of the Royal Opera of Turin, Italy, before winning her seat on the Munich Philharmonic, where she played for 13 years. After winning a lengthy court case, Conant won a full-tenured professorship at the University of Music in Trossingen, Germany, and left the orchestra in 1993. She has had roles in the feature film, "The Devil's Triangle," and in the epic 13-film story of a German composer's life and times, "Die Zweite Heimat (The Second Homeland)."