clean, readable, and full of information 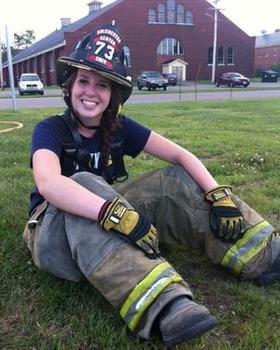 COLCHESTER, VT (03/05/2013)(readMedia)-- In competition with some of the largest universities in the country, the Saint Michael's College Fire & Rescue website was named best in the nation at the 20th Anniversary Conference of the National Collegiate Emergency Medical Services Foundation (NCEMSF) held February 22 - 24 at the Hyatt Regency Hotel in Washington, DC.

The website was created by a member of the Saint Michael's Fire Squad, Amy McGann, a sophomore information systems major, the daughter of Nancy and Robert McGann of Hanover, Mass. The clean, readable site has received 20,788 visitors since May 2012. It contains depths of information accessed by clicking on the word SITEMAP on the right beneath the scrolling photos atop the page.

Founded in 1969, the Saint Michael's College Fire & Rescue Squads have been in operation 24/7 continuously since then. The squads operate throughout the school year, through the summer, and during all vacation periods. They have been a model for the creation of such squads on other college campuses.

NCEMSF is a non-profit organization committed to "scholarship, research and consultancy activities and to creating safer, healthier environments on college and university campuses throughout North America."

There are now over 250 college campus-based emergency medical service (EMS) agencies trained to respond within minutes and provide care tailored specifically to campus emergencies. NCEMSF's purpose is to support, promote, and advocate for EMS on college and university campuses, and its annual creates a forum for where ideas can be exchanged and problems solved.

Awards presented at the conference included the following

This year's conference program included over 110 lectures, roundtable discussions, expert panels and skills labs in two and half days of programming ranging from the treatment and management of various traumatic and medical emergencies to EMS research to leadership development and strategic planning for the collegiate EMS agency. A series of roundtable discussions took place in which leaders and advisors from various university squads reviewed common problems facing their squads and challenged themselves to find innovative, feasible solutions. The conference also featured several skills labs focusing on airway management, advanced ECG interpretation, improvisational splinting and transport of patients and simulated assessment scenarios.

Learn What Matters at Saint Michael's College, The Edmundite Catholic liberal arts college, www.smcvt.edu . Saint Michael's provides education with a social conscience, producing graduates with the intellectual tools to lead successful, purposeful lives that will contribute to peace and justice in our world. Founded in 1904 by the Society of St. Edmund and headed by President John J. Neuhauser, Saint Michael's College is located three miles from Burlington, Vermont, one of America's top college towns. Identified by the Princeton Review, 2013 as one of the nation's Best 377 Colleges, and included in the Fiske Guide to Colleges 2013, Saint Michael's has 1,900 undergraduate students and 500 graduate students. Saint Michael's students and professors have received Rhodes, Woodrow Wilson, Pickering, Guggenheim, Fulbright, and other grants. The college is one of the nation's top-100, Best Liberal Arts Colleges as listed in the 2013 U.S. News & World Report rankings.