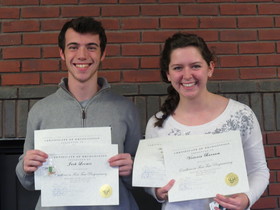 John (Jack) Loomis and Victoria Barnum, sophomores at Saint Michael's travelled to the NEACURH conference at Stony Brook University, Nov. 15-17. Some 380 students representing 57 schools from across New York and New England gathered for the conference about programming, monitoring and guiding students in higher ed residence halls.

Jack Loomis and Victoria Barnum presented the Quidditch Tournament, a program they have put on at Saint Michael's College three times. They encouraged other campuses to try one, as it involved some 200 SMC students-participants and spectators-each time they have held the team-building, raucous, entertaining program. The program, called "You Don't Have to Jump through Hoops: College Quiddich Made Easy," was one of 43 programs presented by students for other students at the conference.

Because their program was named a "Top 10" of the conference, they were asked to present it a second time on Nov. 16. Then, when they were presented a certificate at the closing banquet, they were also named recipients of the "Excellence in First-Time Programming" Award.

"It was an honor to represent St. Mike's at such a fun conference," Jack and Victoria both said. "We were proud to spread the college name around the regional and we want to do more such presentations."

At Saint Michael's College www.smcvt.edu  students are challenged to do their best, find their niche, take on opportunities to grow, and immerse themselves in academic pursuits. A residential Catholic college, Saint Michael's is steeped in the social justice spirit of its founding priests, the Edmundites. Saint Michael's is located three miles from Burlington, Vermont, one of America's top 10 college towns. Headed by President John J. Neuhauser, the college has 1,900 undergraduate students and 500 graduate students. A prestigious Phi Beta Kappa institution, Saint Michael's also features an extraordinary Wilderness Program and rare Fire & Rescue Squad, both of which other colleges use as models. Identified by the Princeton Review, 2014 as one of the nation's Best 378 Colleges, and included in the Fiske Guide to Colleges 2014, Saint Michael's students and professors have received Rhodes, Woodrow Wilson, Goldwater, Pickering, Guggenheim, Fulbright, and other awards. The college is one of the nation's top-100, Best Liberal Arts Colleges as listed in the 2014 U.S. News & World Report rankings.