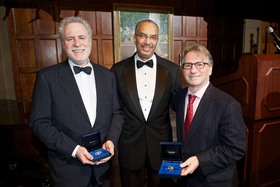 The award, given to individuals who exhibit lifelong excellence in the legal profession and unparalleled civic contributions, was presented by State Bar President Seymour W. James, Jr. on January 26 during the President's Dinner at the conclusion of the organization's 136th Annual Meeting.

"The State Bar Association is pleased to honor Peter Neufeld, Barry Scheck and the Innocence Project. Their groundbreaking work has helped reverse many wrongful convictions and has raised awareness of the systemic procedures and practices that have led to those injustices," said James (The Legal Aid Society in New York City).

Both previously distinguished themselves through their work in civil rights and criminal defense law, as well as for their expertise on the scientific use of DNA in criminal investigations.

Scheck rose to national prominence in the Hedda Nussbaum case involving a woman accused of killing a child in her care, while Neufeld represented Abner Louima in the famous New York City police brutality case in the mid-1990s. Both Neufeld and Scheck were members of the O.J. Simpson defense team, as well as the lead attorneys on a number of prominent civil rights cases.

They are founding partners of the New York City law firm of Neufeld Scheck & Brustin, which specializes in constitutional civil rights litigation and other complex civil matters. Scheck, of Queens, is a law school graduate of the University of California at Berkeley. Neufeld, of Brooklyn, earned his law degree from New York University.

In 2000, Scheck, Neufeld and New York Times reporter Jim Dwyer co-wrote, "Actual Innocence: Five Days to Execution, and Other Dispatches From the Wrongly Convicted," a book that drew upon cases and stories from their organization.

The fight against wrongful convictions long has been a key component of the State Bar Association's legislative agenda. In 2009, the report of its Task Force on Wrongful Convictions put the spotlight on 53 wrongful convictions in New York since 1964 and recommended changes to reduce the number of instances.

In March 2012, and again in May, the Innocence Project and the New York State Bar Association held joint press conferences on wrongful convictions.

"If lawmakers are serious about their desire to prevent wrongful convictions and improve public safety, they will pass a reform package that improves police investigation practices to ensure that the right person is convicted," Neufeld said in March, explaining that expanding the state DNA database alone will not address the underlying causes of wrongful convictions.

During the second press conference in May, Scheck also called on state lawmakers to go beyond expanding the DNA database.

"If they are really concerned about protecting the innocent," Scheck said, "they will pass legislation this session to prevent misidentifications and false confessions, two of the leading causes of wrongful convictions. These reforms help protect all New Yorkers, from crime victims to innocent suspects, to the public at large because they enhance the ability of police to find the real perpetrators."

The New York State Bar Association, with 76,000 members, is the largest voluntary state bar association in the country. It was founded in 1876.