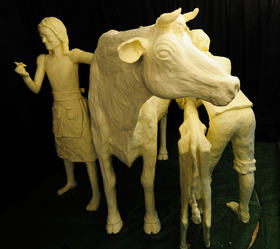 This year's butter art features a replica of the first butter cow display dating back to 1911. The sculpture also incorporates a young girl as a tribute to long-time sculptor Norma "Duffy" Lyon.

DES MOINES, IA (08/11/2011)(readMedia)-- During the opening ceremonies of the 2011 Iowa State Fair, the 100th anniversary Butter Cow and companion sculpture were revealed and the winning concrete cows were announced. "Nothing Compares" to the celebration and activities at the Fair, which runs through August 21.

In addition to the Butter Cow, sculptor Sarah Pratt crafted a replica of the original 1911 cow and calf on display with a young boy and chicken. The display also includes a young girl and butterfly as a tribute to long-time sculptor Norma "Duffy" Lyon and her carefree spirit. Pratt explained her sculpture in a heartwarming tribute to her mentor during the ceremonies.

Winners of the concrete cow decorating contest were also announced as part of the ceremonies. More than 60 concrete cows painted by Iowans pay tribute to the 100th anniversary of the Iowa State Fair Butter Cow and were judged on the basis of creativity and use of additional materials. Fairgoers had the opportunity to showcase their creative talents, in professional or novice categories, and decorate a concrete cow in any way they chose. From paints to clothing to accessories, these concrete creations are covered from head to toe and on display throughout the Fairgrounds.

Above and Beyond Creativity Award - Pirates of the Cowibbean, Nobbies Party Store, Clive

Visit http://www.iowastatefair.org/fair-attractions/butter-cow/ for a printable map with a listing of all the concrete cow locations.

"Nothing Compares" to the 2011 Iowa State Fair, celebrating 100 years of the Butter Cow August 11-21. The Fairgrounds are located at East 30th and East University Avenue, just 10 minutes east of downtown Des Moines, and are open 7 a.m. to 1 a.m. each day of the Fair. Exhibit hours may vary. For more information, call 800/545-FAIR or visit iowastatefair.org.