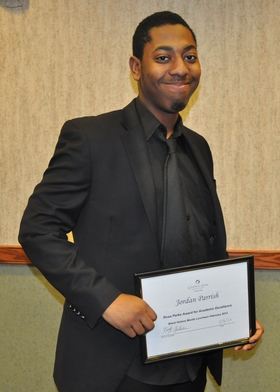 In addition to earning a spot on the Dean's List seven times, Parrish serves as a student ambassador and served as a peer mentor for the summer and fall 2012 terms. Described as a "proven leader on the Summerdale campus," and an intellectual and independent thinker, Parrish was involved in the college's Craiger C. Parker Leadership Development Program and the writing club and he founded the Knights of Civil Liberty club. He is dedicated to giving back by performing community service.

Students are nominated by the faculty and staff of Central Penn. Parrish was one of four Central Penn College students awarded for their outstanding performance in the areas of academic excellence, community service, leadership and character during the college's Feb. 6 Black History Month luncheon.

Central Penn College has been helping students turn potential into career success since 1881, offering bachelor's and associate degrees in the fields of accounting, business administration, criminal justice, information technology, communications, healthcare, homeland security, legal studies and organizational leadership. The College, currently serving students at its Harrisburg, Lancaster and Lehigh Valley locations, attributes its high rate of student success to a caring faculty and its hands-on learning approach. Based on Central Penn's most recent One-Year Graduate Survey, 82.9 percent of graduates were employed in their chosen field or continuing their education within one year of graduation. Central Penn College is accredited by the Middle States Commission on Higher Education, 3624 Market Street, Philadelphia, PA 19104 (267-284-5000). The Middle States Commission on Higher Education is an institutional accrediting agency recognized by the U.S. Secretary of Education and the Council for Higher Education Accreditation. www.centralpenn.edu