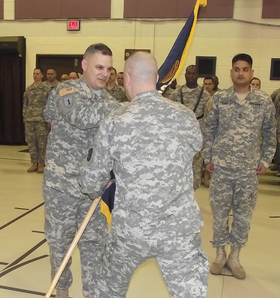 Tagliaferro replaced Lt. Col. Christopher Ciccone Jr., an East Greenbush resident who is also a veteran of the Iraq War, who will become the deputy intelligence officer for the New York National Guard's Joint Forces Headquarters.

In 1993, he entered the inactive reserve and left military service in 1998. Following the events of Sept. 11, 2001 he rejoined the New York Army National Guard and served in the 42nd Infantry Division.

He deployed to Tikrit, Iraq with the division 2005 and served as the commander of the 42nd Infantry Division's Headquarters and Headquarters Company.

In 2009 LTC Tagliafierro was mobilized and deployed to Iraq as an "Information Operations Targeting Officer" with the National Guard's 34th Infantry "Red Bull" Division and remained in Iraq with the "Big Red One" 1st Infantry Division until August 2010.

Tagliafierro is employed by the New York State Comptroller's Office in the Local Government and School Accountability Division, in the Glens Falls, NY Regional Office.

His awards include the Bronze Star, the Meritorious Service Medal, the Iraqi Campaign Medal, and the Global War on Terrorism Expeditionary Medal.