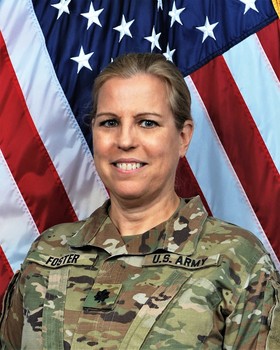 She will replace Lt. Col. Matthew Schaffer, a Marlboro resident and New York State Police investigator, who will be assigned as Provost Marshall of the 42nd Infantry Division in Troy, N.Y.

Members of the media are invited to cover the event at the Seward Elementary School.

WHAT: A Traditional Change-of-command ceremony in which the flag, or colors, of the 102nd Military Police Battalion will be transferred from the outgoing commander – Lt. Col. Matthew Schaffer-to Col. Fowler, the higher level commander, who in turn hands the colors to the incoming commander, Lt. Col. Monique Foster.

On the battlefield, the unit's colors marked the location of the commanding officer. The ceremony of passing the colors allowed soldiers to know who they should be following in battle.

Reporters will be able to interview the incoming and outgoing commanders and obtain still and video images of the change of command ceremony and troops in formation.

Lt. Col. Monique Foster began her military career as an Ensign in the Coast Guard after graduating from the US Coast Guard Academy in New London, Connecticut with a Bachelor's Degree in Chemistry. She served as Ship's Navigator and Operations Officer servicing Aids to Navigation in the Great Lakes and completed a deployment to the Caribbean conducting Drug Interdiction Patrols.

Foster was selected for command as the first female to be stationed on LORAN Station Attu Island, Alaska a 12-month isolated duty tour. She completed her Coast Guard service as a Marine Inspector in Seattle, Washington.

After leaving the Coast Guard, Foster served as a deputy sheriff in Portland, Oregon. She moved to her hometown of Rochester in 2002 and in 2003 she joined the New York Army National Guard as a military police platoon leader in the 105th Military Police Company in Buffalo.

She deployed to Iraq in 2006 as the executive officer of the 240th Military Police Company, an element of the Puerto Rico National Guard. The unit conducted partnership training with the Iraqi forces.

In 2008 she took command of the 222nd Military Police Company. She has also served as logistics officer for the 27th Brigade Combat Team Rear Detachment during the brigade's deployment to Afghanistan.

She is currently serving full-time as the State Equal Employment Manager and Sexual Assault Response Manager for the New York National Guard.

Foster works in corporate security in her civilian career.

Foster lives in Penfield and has two daughters; Mai Lynn, 24, who is a graduate of SUNY Brockport and has started on her Master's Degree in Psychology, and Mika, 20, who is completing her Bachelor's of Science degree from Roberts Wesleyan College in Forensic Psychology.

Lt. Col. Matthew Schaffer was commissioned as a 2nd Lieutenant from Norwich University in 2003 and served in the 101st Air Assault Division. He deployed to Iraq in 2003 as a platoon leader in the 501st Signal Battalion and in the fall of 2005 he deployed to Iraq again, as a member of the 526th Brigade Support Battalion.

Schaffer left active duty in June 2007 and joined the New York Army National Guard's 104th Military Police Battalion. He commanded the battalion's Headquarters Detachment from 2010 to 2013. He has also served as the battalion operations officer and executive office before becoming assistant provost marshal of the 42nd Infantry Division.

Schaffer lives in Marlboro, NY and is the father of five daughters; Morgan, Abigail, Emily, Kate, and Rebecca. He is employed by the New York State Police, holds the permanent rank of Sergeant and currently serves as an Investigator assigned to the Violent Gang Narcotic Enforcement Team.

The 102nd Military Police Battalion traces its history back to the organization of the 16th Battalion of the New York National Guard in 1898 and organized from companies in Utica, Malone, Watertown, and Ogdensburg.

The battalion's predecessors served in World War I in Europe, in World War II in the Pacific as part of the 27th Infantry Division.

The unit served as an anti-aircraft and armored cavalry unit before becoming a Military Police unit in 1959.