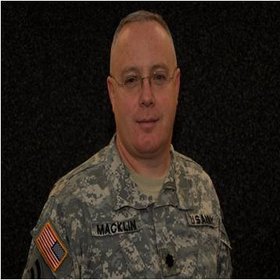 NEW YORK, NY (05/12/2016)(readMedia)-- New York Army National Guard Lt. Col. Patrick Macklin, a Wantagh resident and an Iraq War veteran, will be promoted to colonel and then take command of one of the New York National Guard's oldest units on Saturday, May 14 during a ceremony at the Park Avenue Armory in New York.

Macklin, who enlisted in the New York Army National Guard in 1988, will replace Col. Martin Dinan as commander of the 53rd Digital Liaison Detachment. Dinan is retiring after 30 years of service in the Active Army and the Army National Guard.

The promotion and change of command takes place at 11 a.m.

Macklin, who has been serving as the domestic operations plans officer for the New York National Guard's Joint Force Headquarters, is a former New York City Police Sergeant.  He currently works as a civilian contractor for the National Guard Bureau in Washington, D.C. where he helps coordinate National Guard emergency response plans.

Macklin served in Kuwait and Iraq in 2004/05 as a tactical operations officer in the 42nd Infantry Division's Tactical Operations Center.

After he enlisted in the Army National Guard as an infantryman, Macklin earned his commission as a second lieutenant through the National Guard's Officer Candidate School program in 1991. He served in the New York-based 1st Battalion, 69th Infantry as a rifle platoon leader, mortar platoon leader, company executive officer, company commander, supply officer and operations officer.

He also served in a variety of positions in the 42nd Infantry Division, headquartered in Troy, to include deputy operations officer, Domestic All Hazards Response Team (DART) Officer in Charge-- a full time job--and division plans officer.

Macklin holds a degree in Marketing and Public Relations from the New York Institute of Technology and is a graduate of Army Command and General Staff College.

The 53rd Digital Liaison Detachment is a very small Army element which provides experts who provide advice and assistance in military operations to supported units and conducts liaison operations for division or corps commanders and subordinate or adjacent joint and multinational headquarters.

Soldiers of the 53rd Digital Liaison Detachment deployed to Afghanistan in 2014/15 and acted as an interface between the Afghanistan Army, Pakistan and the American-led Multinational Coalition Forces.

When it was organized as the 53rd Army Liaison Team, the unit deployed to Iraq in 2009/10 and 2004/05 to coordinate between American military units and the Iraqi Army.

The 53rd Digital Liaison unit traces its history back to the 7th Regiment of the New York National Guard, which was known as the " silk stocking regiment" because it included members of New York City high society in its ranks. The unit was renamed the 107th Infantry Regiment during World War I and became the 107th Army Support Group in 1993 until it's heritage was transferred to the 53rd Army Liaison Team.

One of the units that eventually became the 7th Regiment was the 2nd Battalion, 2nd Regiment of Artillery. In 1824 when the Marquis De Lafayette-who fought with George Washington during the American Revolution-was visiting New York, the battalion renamed itself the National Guard because Lafayette had commanded the French Gard Nationale de Paris during the early days of the French Revolution.

Eventually the name National Guard for the state militia was adopted by New York in the 1860s. More and more states began using the term until it became federal law in 1903.