Urge Mayor to stop the scheduled transfer of residents of the Lucerne to the Radisson, and stop letting wealthy, private interests drive public policy 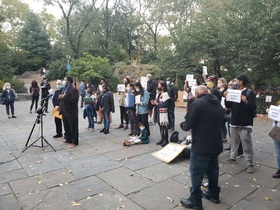 BROOKLYN, NY (10/16/2020) (readMedia)-- Last night, faith leaders, homeless residents from the Lucerne, elected officials, and advocates staged a sit-in at Gracie Mansion to protest Mayor de Blasio's decision to move shelter residents to the Radisson. They delivered a "Tale of Two Cities" award made by Quincey, an 11-year-old resident of the Upper West Side, who has befriended and supported Lucerne residents along with other UWS kids. Residents of the MAve family shelter, slated to be closed with residents moved to other locations, some in other boroughs, also joined. Faith leaders also announced a declaration of support for Lucerne residents, signed by over 30 faith leaders from the neighborhood. The full letter is here.

"As of this date, the mayor and DHS are attempting to move the residents of the Lucerne again, to yet another hotel, this one in the Wall Street area. Based on our knowledge and understanding of the situation, we believe this planned move to be ill-advised, given the need for stability in order for the men to move forward with their lives, recover from substance use disorder, properly handle mental health issues, and work toward obtaining permanent housing. We believe that the planned move will wreak havoc on the men, as well as trigger emotional and mental trauma."

The sit-in comes after news that a downtown NIMBY group has filed an injunction to prevent the move, but as of now Project Renewal still plans to transfer the men on Monday, October 19th. For some residents, this will be their third or fourth move during the pandemic.

In late July, clients of Project Renewal were placed at the Lucene after being transferred from another hotel in Midtown following community objections. Soon after, Bill de Blasio caved to a group of Upper West Siders who started a racist facebook group and raised $150,000 to hire top litigator Randy Mastro to kick Project Renewal shelter residents out of the Lucerne. The Mayor's decision to move the shelter has emboldened NIMBYs across New York City to privately fundraise ever-growing sums to keep shelters out of their neighborhoods.

The issue has become a flashpoint in city politics with nearly every candidate for mayor weighing in against de Blasio's ill conceived decision. Just yesterday, NYC Councilmembers Mark Levine, Carlina Rivera, Steve Levin, and Helen Rosenthal sent a letter demanding that the Department of Homeless Services halt shelter transfers until a COVID-19 vaccine is available. Last week, Corinne Low, co-founder of the UWS Open Hearts Initiative, and Da Homelss Hero, a Lucerne shelter resident, penned an op-ed in the Nation. The piece argues that Mayor de Blasio's decision to cave to pressure from overwhelmingly white families and move hundreds of homeless men of color from their temporary shelter will destroy his progressive legacy, and the community model Open Hearts and shelter residents have built.

"Black people and Brown people are no longer going to sit by and be the victims of your oppression. I, a simple Homeless man, who doesn't like the spotlight have taken this initiative to challenge your power structure and have committed to tearing it down. An election is coming up and people will use the power of their vote to get rid of people like you. Next year you will be on your out, but suffice it to say that your legacy has been forever tarnished by how you have dealt with those of us at the Lucerne. Your legacy of creating pockets of urban segregation and gated communities full of racism has made you the worst mayor in the history of New York City because Mr. Mayor, You Are A Racist," said Shams, aka Da Homeless Hero.

"Mayor de Blasio's ill conceived decision to cave to pressure from wealthy, private interests and displace the men from the Lucerne has created a kind of NIMBY whack-a-mole. Now communities across Manhattan think the way to make public policy is by paying a high profile lawyer to keep poor people out of their backyard. The Mayor's response to these lawsuits is shameful: he is trying to dodge blame, while hanging a welcome sign for NIMBYs. The Mayor ran on a campaign about ending extreme inequalities, now he's doing his very best to deepen them. Mayor de Blasio, you can still do something to salvage your legacy by standing up for the men at the Lucerne," said Corinne Low, co-founder of UWS Open Hearts.