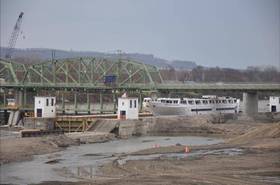 WHAT: Cruise ship Grande Mariner returns to the Erie Canal

WHY: The Grande Mariner was stranded for several weeks when the Erie Canal was hit with catastrophic flooding last year; this event celebrates her return to canal service.

ATTACHED PHOTO: M/V Grande Mariner passes through Lock 9 of the Erie Canal near Schenectady, N.Y., in the fall of 2011 in the aftermath of severe flooding.

DRIVING DIRECTIONS to Battery Park in Waterford: Travel north on Route 787 to the end in Cohoes. Turn right (north) on Route 32 (Saratoga Street) into Waterford. Cross the bridge over the Erie Canal. Bear right onto Broad Street. Pass through the traffic light and cross over old Champlain Canal. Proceed 4 blocks and turn right onto First Street, follow to end.