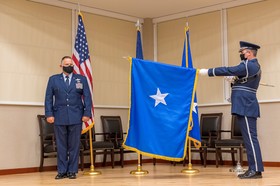 AUGUSTA, ME (08/11/2020) (readMedia)-- Maj. Gen. Douglas A. Farnham, the Adjutant General for Maine, promoted Frank W. Roy?from the rank of colonel to brigadier general during a ceremony held on Aug. 2, 2020.?With his promotion, Roy assumes the duties of the chief of staff for the Maine Air National Guard in Augusta, where he will serve as a strategic advisor for the Maine National Guard.

The event at the Regional Training Institute in Bangor was both a socially distanced in-person ceremony and a live-streamed broadcast. Roy, of T1R9, was joined by his wife, Joy, and daughter, Mollie, and other family and friends at the event, while his son, Jake, watched the broadcast live from Texas, as did other family members and friends who could not attend.

"I would not be where I am today without the amazing support of so many people, including my family, and the members of the entire Maine National Guard, who collectively exemplify selfless service like no other organization can," said Roy. "My promotion is a direct reflection of this support network and I am incredibly thankful to everyone who I have had the privilege of working with throughout my career."

Roy, 51, enlisted in the Maine Army National Guard in 1986 as a combat medic during his senior year at Lee Academy. He was commissioned as a second lieutenant in 1990 through the Maine Military Academy in Augusta.

As an officer in the Army National Guard, Roy was first trained as an engineer followed by rotary wing pilot training, where he graduated as the distinguished graduate of the OH-58 Aero Scout program. He would fly the UH-1 helicopter with the 192nd Air Assault Company in Bangor until transitioning into the Maine Air National Guard in 1993.

"I've been incredibly honored to be a member of such an outstanding organization," said Roy. "The members of the 101st have continued to excel at everything they do and I will always cherish my time with them."

During the ceremony, Roy's family joined him on stage to pin on the rank of brigadier general. Roy was also presented with his general officer flag, which signifies the presence of general officers at military ceremonies.

Comments were made by Farnham, and former 101st Command Chief Master Sgt. Dan Moore. Command Chief Master Sgt. Scott Osgood served as the master of ceremonies and noted a lengthy list of distinguished visitors who were in attendance, both in person and virtually. This list included several of Roy's family members who served in the military. The 101st also presented Roy with a plaque commemorating his promotion on behalf of the unit he had been a member of for over 26 years.