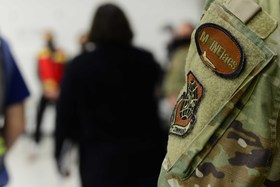 AUGUSTA, MAINE (02/10/2022) (readMedia)-- For over five months members of the Maine Air National Guard have supported Operation Allies Welcome at Joint Base McGuire-Dix-Lakehurst, New Jersey. The airmen are there as part of Task Force Liberty, which supports housing, medical, transportation, and logistical operations for vulnerable Afghans as they arrive in the United States. A number of these Afghans worked alongside U.S. forces in Afghanistan for the past 20 years.

Operation Allies Welcome, the name of the overarching efforts at multiple locations across the country, was established by the Department of Homeland Security on Aug. 29, 2021. A key factor in OAW's mission includes screening and vetting of the Afghans and completing the Special Immigrant Visa process for resettlement in the U.S.

Task Force Liberty is a team of DHS and Department of State personnel, Department of Defense service members and civilians, resettlement partners and affiliates and non-governmental organizations united for a common purpose. The task force makes various accommodations and services available to the Afghans arriving at Joint Base McGuire-Dix-Lakehurst after departing Afghanistan.

The first members of the Maine Air National Guard joined Task Force Liberty in mid-September. Several other rotations have followed. In all, about 20 MAINEiacs have assisted during tours lasting 6-10 weeks. The airmen have worked at various levels throughout Liberty Village, the area at the base supporting the Afghans.

"We arrived on Sept. 16 and there were about 9,000 Afghans already on the base," said Capt. Joseph White, who served as the Joint Operations Center Liaison Officer to the non-Department of Defense agencies. "In addition to the Afghans, there were about 2,000 U.S. personnel there and it was amazing to see what a large-scale effort this was by all agencies."

"I volunteered for this mission because I witnessed enough wartime strife on the civilian population during the 1983-2009 Sri Lankan civil war," said Welikadage, who supported safety efforts a Liberty Village. "I saw an opportunity to assist another community facing a similar issue and wanted to help."

Welikadage likely saved an infant's life while working in Liberty Village. The infant was choking on a piece of plastic and the airman quickly jumped into action, successfully performing back blows and chest thrusts to dislodge the plastic, reestablishing the child's airway.

"That's an experience that I will never forget," said Welikadage, who works full time as a logistics plans specialist for the 101st Air Refueling Wing in Bangor. "We were there to do the best we could to support these people, and that was just something I was able to help with."

As Operation Allies Welcome continues, so does the Maine Air National Guard's support. The MAINEaics currently have 12 airmen working in various capacities within Task Force Liberty.

"I'm amazed at the scope of the mission," said Lt. Col. John Kayser, who served as the task force's engineering branch chief. "At one point there were over 13,000 guests and support personnel there, which would make it one of the largest towns in Maine. Being a part of this operation in helping these families begin their lives in the United States is something that we all know makes a difference."

Kayser, of Scarborough, arrived at Liberty Village in November and completed his mission this week. His civilian experience as a professional engineer and project management professional were quickly put to use by working with contractors and agencies to provide vital services to the small city.

"The National Guard is an incredible resource for operations like this as many of us carry additional skills and training we acquire in our civilian careers," said Kayser. "It isn't your typical military mission, but walking down the street after a 12-hour shift while being greeted by smiling Afghan children is something I'll always remember."

The Maine Air National Guard plans to provide more airmen to the mission in several weeks, with those currently there returning in February. Eventually, Operation Allies Welcome will draw to an end through the transitioning process for the Afghans. For thousands, the support provided by the Maine Air National Guard will be remembered as creating a warm welcome to their new home.