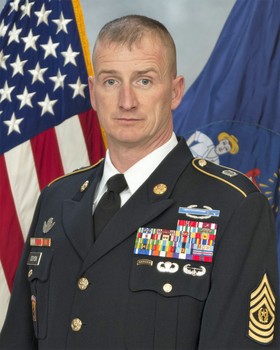 "CSM Doyon has served with honor and distinction for the past 27 years," said Maj. Gen. Douglas Farnham, Adjutant General for the Maine National Guard. "He has been a key member of my team and we know that the organization is a better and stronger place because of his efforts."

Doyon, the senior enlisted advisor to the Adjutant General, served as State Command Sergeant Major from February 2015 to June 2018. The state command sergeant represents the NCO corps, influencing policy and serving as a role model, standard-bearer and voice for enlisted personnel.

"I am humbled to be here today with so many soldiers, family and friends who have taken the time from their busy schedules to share this moment with me," Doyon said. 'If you had asked me 27 years ago if I would be standing here today as the outgoing State Command Sergeant Major, I would have said heck no!"

Doyon enlisted in the US Army as an active duty Soldier in 1991. After his initial service obligation was finished, Doyon joined the Maine Army National Guard as an infantryman in 1998.

"The military has been my life since graduating high school. I have been fortunate enough to serve in many positions, traveled to over thirty countries, 36 states and deployed six times – all for free," he said, "In fact, the Army even paid me".

Doyon deployed on three separate occasions in support of both Operation Enduring Freedom and Operation Iraqi Freedom. During his final deployment, he was the sergeant major of both an embedded training team responsible for over 1,200 Afghan Soldiers and Afghan National Police as well as the noncommissioned officer in charge of a provincial reconstruction team.

"There is no way I could personally thank everyone who has helped me become who I am today," Doyon said. He offered memories of those who shaped his career and those who provided guidance and mentorship along the way.

"To my family, especially my wife and my daughters, I have been blessed," Doyon said. "You have been my rock, my reality check and there for me even when I missed important events in your lives."

"After serving with the Maine Guard for all of these years and knowing the technical and tactical expertise, the professionalism and dedication we have; my family and I will sleep soundly knowing you are on watch because my watch is now over," Doyon said.