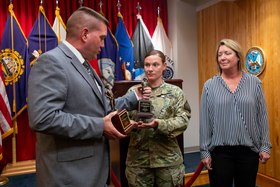 Sgt. 1st Class Kimberly Richardson, one of the MEARNG MEPS guidance counselors who received the award said, "Receiving this award not once but twice is an honor. We are humbled by the praise we have received at the highest levels of the National Guard."

MEPS around the country are where enlistees from all components go to process and qualify for accession into the military. Maj. Jeremy Allie is the Portland, Maine MEPS commander explained the role of MEPS.

"We are the vital link between recruiting and training today's Armed Forces. Our command's motto is 'Freedom's Front Door' as a symbol of the command's mission of determining the physical, mental, and moral qualifications of every member of the Armed Services."

To enlist in the MEARNG, the MEPS guidance counselor is involved in the last step of a person's process to go from civilian to soldier. For Maine, those counselors include Richardson and Sandra Beauchesne, a retired sergeant major from the Maine Army National Guard who now works as a civilian contractor.

"As MEPS guidance counselors, we complete the final stage of any individual processing for the Army National Guard," said Beauchesne. "This includes processing, contracting, and shipping applicants and soldiers into the National Guard."

There are 65 other MEPS across the United States, and territories. Matthew Saracco, the National MEPS guidance counselor manager who presented the awards to Richardson, and Beauchesne said it's practically unheard of to win the award two years in a row.

"It's very difficult as the majority of the 65 MEPS continue to improve and refine their local standard operating procedures and training plans," Saracco said. "These past two years have been especially difficult to judge and were separated by a small percentage point from victory to second or third place finishers."

One of the minimum qualifications for the award includes receiving a score of 97% or above on the quality of shipper packets. The packets include the actual enlistment contract, individual administrative data, medical information, and anything else a person may need to enlist. If a packet is missing information, has a typo, misspelled name etc. it's considered a deficiency and can prevent a person from being able to enlist. The MEARNG guidance counselors received a score of 99.5%.

The other two categories they are scored in include the staff assisted visit (SAV) checklist of which they scored 99 out of 100, and suitability/security deficiencies of which they had zero.

Due to their success, Richardson and Beauchene's knowledge and experience extends past their Portland office. Sarraco said, "Ms. Beauchene and Sgt. 1st Class Richardson both were instrumental in assisting NGB in re-writing several regulations and policies used in the MEPS and Recruiting current operating environments."

For Richardson, receiving the award is humbling, and an honor but, it's the people that come through the MEPS that is the most rewarding.

"The individual interaction with each applicant and shipper is the best part," said Richardson. "Watching the change in each individual from enlistment to shipping, to the completion of training, provides a unique sense of pride for the organization - a sense of pride that too often we overlook by getting caught up in the demands, repetition, and rush of our positions."

Though Beauchesne and Richardson received the award they both said it was a team effort which includes many people within the MEPS, National Guard Bureau and the MEARNG recruiting and retention battalion.

"We would like to give a special thanks to those that support us in this position each and every day: the team at the accession suitability office; Mr. and Mrs. Snyder, our security interviewer's; Master Sgt. Campbell and his NGB recruiting operations team; 1st Sgt. James Robbins and his team; Maj. Allie and his MEPS team; and Mr. Cardwood and Mr. Saracco for their dedication to not only this office but the National team."

4: Matthew Sarraco (left), Sgt. 1st Class Kimberly Richardson (second from the left), Sandra Beauchense (second from the right), and Maj. Jeremy Allie (right). Sarraco, the National Military Entry Processing Station (MEPS) guidance counselor (GC) program manager, awarded Richardson and Beauchense Best MEPS of the year awards for 2019 and 2020. Allie, the Portland MEPS commander said, "Mrs. Beauchesne and Sgt. 1st Class Richardson achieved this award two years in row and we are proud that our organization had a role in that. I think it's a testament to their ability to work effectively between the recruiting force and the MEPS staff and to not only get the mission accomplished, but execute at a very high level."