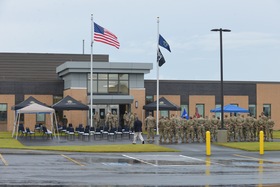 PRESQUE ISLE (09/12/2021) (readMedia)-- The drizzle tapered out just in time for attendees to stay dry as the 185th Engineer Support Company cut the ribbon on their new home on September 10, a project nearly three years in the making.

"Our thanks to Devoe Construction, WBRC, and all subcontractors involved," said Maj. Gen. Douglas Farnham, Maine's adjutant general. "We all recognize the challenges in a project like this, under normal circumstances. But with over 18 months of responding to COVID, my guess is the challenges were extraordinary. Thank you to our Congressional delegation. We are very lucky in Maine to have delegation willing to work together on issues related to the National Guard – their support is critical to making this type of project possible."

Both Mr. Robert Frank of WBRC Architects & Engineers and Mr. Marc Dube, Maine Army National Guard project manager, offered remarks on the collaborative teamwork that went into the new 44,000 square-foot facility in order to ensure it had both the best available features for the unit, and the latest in energy-efficient technology. Dube then presented the unit commander, Capt. Evan Richards, with a commemorative shovel used to break ground on the facility in November 2018.

"Our organization has had a rich history in Aroostook County since 1894," said Farnham. "It began with Company L, 2nd Maine Infantry Regiment in Houlton. In 1922, they were reorganized into the 152nd Field Artillery Regiment. Artillery maintained a foothold in The County through 2007, when the battalion was consolidated into the 185th Engineer Support Company, who proudly retains the motto 'County Thunder,' an homage to their field artillery days."

Farnham said that despite all the features of the new facility, the real investment is in the capabilities and readiness of Maine soldiers.

"When we come to work in this building, and around the state, we are obligated to do our very best to be worthy of that investment – that's the deal, that's the oath we take. As we cut the ribbon today, we know the Maine National Guard has a long history of meeting those expectations."

One of four engineer companies under the 133rd Engineer Battalion, the 185th has played a significant role in numerous community projects through the Innovative Readiness Training program, to include missions in St. Agatha, Caswell, and as far south as Kittery, where they recently completed the Maine National Guard's involvement in the Wood Island restoration project.

In January 2021, several soldiers from the 185th were sent to Washington, D.C., in support of the 59th Presidential Inauguration. Nationwide, over 21,000 National Guardsmen responded to the nation's capital.

The new readiness center will house approximately 75 of the unit's 100 soldiers, and replaces the 185th's facility in Caribou. The unit continues to maintain a detachment in Houlton.