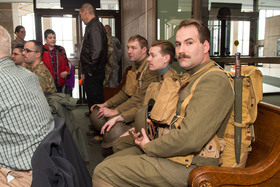 Former Maine Governor Carl Milliken said in his War Address to the Maine Legislature on April 3, 1917, "Let us, by appropriate action, assure the President and Congress of our full and loyal support in this solemn hour of national crisis. No words need be added to his noble statement of the case. The eloquence of deeds can best be ours."

"Entry into the war was not a surprise and most of the men who signed up to serve knew exactly what they were getting in to," said Farnham. "The Maine National Guard was made up from community members and families serving side by side. Mainers of all backgrounds: millworkers, lawyers, politicians, farmers, immigrants, Native Americans, sailors, fisherman, and lumberman".

The War Department granted authority in September, 1917 for the establishment of an infantry regiment of National Guard. This unit was formed around the 2nd Maine Infantry and was designated the 103rd Infantry Regiment, assigned to the 26th "Yankee" Division.

"For the first time in our history we were entering a European conflict," said Bratten. "Sending our soldiers to European shores".

"The coming two years would change the face of Maine and the Nation, forever," said Bratten. "The echoes of World War I are still felt in our time, from as wide a spectrum as the events in the Middle East, down to the lopped off branches of family trees here at home".

Over 32,000 Mainers served in uniform during the war; over 1,000 never came home, paying the ultimate sacrifice.

"As we commemorate the United States entry into World War I, we remember the service and actions of those who served; not just for what they did but for their legacy of service," said Farnham.