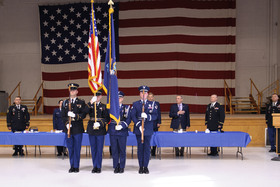 AUGUSTA, ME (05/04/2017) (readMedia)-- The Maine National Guard hosted the 26th Annual Interfaith Prayer Breakfast at the Augusta Armory today to recognize the National Day of Prayer, an annual patriotic event that celebrates the diversity of all faiths and works to build understanding and unity.

Gov. Paul R. LePage attended today's ceremony and provided remarks to a room of approximately 150 members of the community, the National Guard, state elected officials, their representatives and Veterans.

The Maine National Guard Prayer Breakfast was instituted 26 years ago in order to celebrate this day, in the spirit that was intended: to encourage prayer, build understanding among faiths, and to acknowledge God's role in our respective and collective lives.

The concept of a day of prayer dates back to the Continental Congress. President Truman signed a congressional bill that mandated that each subsequent President designate a National Day of Prayer at his/her discretion. President Ronald Reagan's 1983 proclamation stated that the two primary intentions of that day "were that it would be a day when adherents of all great religions could unite in prayer and that it may one day bring renewed respect for God to all the peoples of the world." Later, in 1988, Congress set the annual observance as being the first Thursday in May.

The purpose of the patriotic ceremony is to build understanding and unity among all faiths. The event included prayers for the nation and readings from the New Testament and Tanakh. Today's speakers talked about the connection between faith, hope and leadership.

"Our state and nation need leadership," Governor LePage said. "Maine people have always been very strong to stand up for their country. Mainers put service before self, the people in this room know leadership and without you we would have no hope."

"There is so much violence in the world," said Braestrup. "Those who earnestly seek peace and justice could take lessons from those who wear the uniform or who have served."

Attendees enjoyed a hearty breakfast with warm fellowship as they listened to the vocal talents from Camden Hills High School Women's Choir and selections from the 195th Army Band.

During the ceremony attendees were encouraged to celebrate both differences and unity and to acknowledge that they reside in a country where they can freely express their relationship to God in their own way and defend to the fullest, their neighbor's right to do the same.

"Spiritual fitness is a key component of resiliency," said Brig. Gen. Douglas Farnham, Adjutant General for the Maine National Guard. "Spiritual fitness above all other forms gives us a sense of well-being and hope moving forward."

170504-Z-SC231-9774: Members of the Maine Select Honor Guard prepare to post the colors at the 26th Annual Interfaith Prayer Breakfast hosted by the Maine National Guard at the Augusta Armory. Governor Paul R. LePage and the Adjutant General for the Maine National Guard, Brig. Gen. Douglas A. Farnham stand behind the honor guard to pay respect to the state and national colors. (Maine Army National Guard photo by Staff Sgt. Angela Parady.)