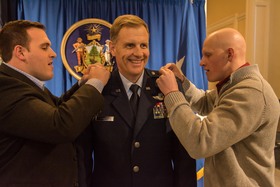 AUGUSTA, ME (01/03/2018) (readMedia)-- Gov. Paul R. LePage presided over the promotion of Brig. Gen. Douglas A. Farnham today to the rank of major general at a ceremony in the Hall of Flags.

"I am pleased to recognize General Farnham during this promotion ceremony," stated Gov. LePage. "Having earned his well-deserved second star as major general, he is Maine's highest-ranking reserve component officer."

Farnham was appointed as Adjutant General on December 29, 2015 and unanimously confirmed by the senate on January 17, 2016. He was promoted to brigadier general on January 21, 2016.

General Farnham graduated from the United States Air Force Academy in 1984. As an instructor pilot and flight examiner in the C-21A Learjet, he served as the primary pilot for Commander, United States Space Command and later taught at the C-21 formal training school.

Farnham joined the Maine Air National Guard in 1991. He has served in various operations and command positions in the 101st Air Refueling Wing. He also deployed as United States Central Command Deputy Director of Mobility Forces.

Prior to assuming responsibilities as the Adjutant General, Farnham commanded Bangor-based 101st Air Refueling Wing in the Maine Air National Guard as a command pilot.

"The majority of my remarks today can be summarized as one big thank you," Farnham said. "Thank you Gov. LePage for your trust and confidence. Thank you to my mentors, so many of you who are responsible for my being here today; and thank you to my family. We probably don't say thank you to our families enough, we couldn't do our mission without our families support."