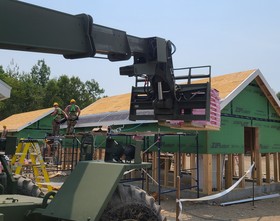 AUGUSTA, MAINE (02/28/2022) (readMedia)-- The Maine Army National Guard was recently informed of its selection as the winner of the 2022 Secretary of the Army Environmental Award for Natural Resources Conservation in the under 10,000-acre installation award category.

As a Secretary of the Army winner, the Maine Army National Guard will compete as the Army's nominee for the 2022 Secretary of Defense Environmental Awards in the same category.

Maine's selection stems from significant efforts over the past two years to facilitate the creation of an over 5,400 acre training site, while balancing development objectives with the protection of over 1,000 acres of wetlands and critical habitat for endangered species such as the Atlantic salmon and Canada lynx.

"There has been a tremendous amount of effort put into this gradual project to bring a state-of-the-art military training facility to Maine," said Maj. Gen. Douglas Farnham, Maine's adjutant general. "All parties involved – our environmental and training sites staff, state and federal interagency partners, our facilities directorate, and units that have aided in construction – all have a great deal to be proud of."

The project began in 2013 with a bond to acquire significant acreage in township T2R9 NWP, followed by additional land in neighboring Woodville. Recent accomplishments include a full environmental assessment and all associated land use permitting, public forums, construction on a 25-meter small arms and light demolitions range, multi-purpose operations buildings, as well as significant work on a battalion-sized encampment area and replacement of seven miles of the original network of old logging roads.

"Recent annual training accomplishments have included roadwork and culvert placement, as well as construction of four multi-purpose buildings," said Cotta, who also serves as commander of the Brunswick-based 133rd Engineer Battalion. "We have plans to construct an additional four buildings this summer."

The Maine Army National Guard intends to continue developing the site to include more permanent infrastructure, and expanding the newly constructed 25-meter range to a 1500-meter range suitable for training to new Army small arms standards, as well as crew-served weapons.

"This is a critical need for our organization," said Col. Joshua Doscinski, director of operations. "The continued development of Woodville Training Site, particularly the range complex, means better and more frequent access to quality training for our soldiers. That translates to both an increase in unit readiness, as well as lethality on the battlefield – two critical concepts as the military moves away from a focus on counterinsurgency and towards competing against a near-peer threat."

"It's important because we're a community-based organization," Farnham continued. "And just like our neighbors, we grew up enjoying the Maine outdoors and its sporting and recreational traditions. So it's important to us that as we continue this project, one that is critically aligned with the readiness of our service members, that we do so in a conservation-minded way. We're committed to being good neighbors to both the people and the land of Penobscot County."

In addition to the economic impact created by development, a full range facility could mean future use by out-of-state active, reserve and National Guard units from multiple services, which could bring additional economic growth to the Lincoln and Millinocket area.

Image 7 - A Canada lynx at Woodville Training Site is captured on game camera.