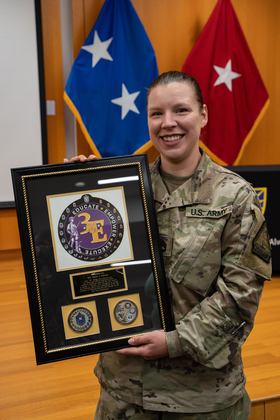 Pelletier's design was chosen from a field of over 20 entries from across the 54 states and territories as the new brand for the office of the NGB senior enlisted advisor.

Months prior, Whitehead asked for submissions from the field to re-brand his office with what he calls the three E's, or "3 Echo" – educate, empower, and execute. These represent the core SEA priorities as he supports the chief of the National Guard Bureau's focus on people, readiness, modernization, and reform.

"Of course I was interested," said Pelletier. "I thought of it as a fun design challenge that would test my creative problem-solving abilities and customer service skills."

Whitehead said Pelletier's design resonated with him because he felt it "embodied history, the present, and the future," and that he appreciated her humble conversation with him when he called to congratulate her, noting that she personified "a spirit of service."

Whitehead thanked those in attendance and the organization for its commitment to a rigorous operational tempo during COVID, support to the Southwest border, overseas operations, and the 59th Presidential Inauguration when essentially a division-sized element descended on the nation's capital from all across the country.

A public affairs specialist by trade, Pelletier currently serves as the marketing noncommissioned officer for the Maine Army National Guard's Recruiting and Retention Battalion. She and her fiancée Paul, also a National Guard soldier and recruiter, reside in Winthrop.