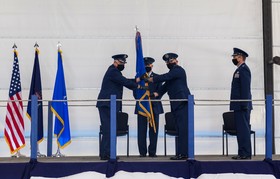 BANGOR, ME (08/11/2020) (readMedia)-- The outgoing commander of the 101st Air Refueling Wing, Col. Frank W. Roy, relinquished command to Col. Matthew A. Bourassa during a socially distanced change of command ceremony on Aug. 1 at the Wing. Brig. Gen. Steven Michaud, Commander of the Maine Air National Guard, presided over the ceremony, which featured the transfer of the Wing's guidon from Roy to Bourassa and remarks from each commander.

Due to COVID-19 restrictions, the ceremony had a limited number of attendees made up of family members, Wing members and distinguished guests. Maj. Gen. Douglas A. Farnham, the Adjutant General of Maine, attended as a past commander of the Wing. The ceremony was live streamed for viewers all over the globe. In past years, the same ceremony has had hundreds of Wing members and guests in attendance. Michaud, Roy and Bourassa took this in stride, speaking directly to the camera at times.

"Col. Roy, Frank, thank you for your outstanding leadership over the past four years," said Michaud. "Most people, when they take these positions, say 'can I leave it a better place than when I arrived,' and you truly did, you absolutely made the Wing a better place."

Michaud commented on the new missions of the Wing has been involved during the COVID-19 pandemic and reassured the Wing that they would continue to be in good hands with Bourassa as commander.

"Col. Bourassa, Matt, you are inheriting one heck of a unit," said Michaud. "You've helped cultivate the unit over the years and it has been a pleasure working with you and watching you grow."

As Michaud concluded his remarks, Roy and Bourassa joined him center stage to transfer the Wing's guidon from the outgoing commander to the new commander. Following the transfer, Roy walked to the podium to make his final address as the Wing's commander.

"To the entire Wing, thank you," said Roy, of T1R9. "You've done a great job and we've done things in an inspection they didn't even know how to write about because we did so well. We've deployed around the world and provided homeland defense. Thank you for taking care of me and the Wing. I have full confidence in Col. Bourassa, and I know he'll do well for you."

Bourassa spoke to his deep appreciation for the opportunity to lead the men and women of the Wing.

"I am indeed humbled and very proud to serve, thank you," said Bourassa, of Bangor. "This is by far the finest military organization in the world. I am very confident that we can do great things together."

Bourassa added that his vision for the Wing's future includes continuing what he referred to as the three R's; Relevance, Resilience, and Ready. He referenced the homeland defense mission that Wing has been supporting, 24-hours a day, seven days a week for over 18 years.

As the ceremony ended and the official party departed the stage, applause filled the Wing's hangar bay. An announcement was made to congratulate both commanders while maintaining appropriate social distances.

Roy, 51, became the Wing commander in June 2016, replacing then-colonel Farnham. Roy departs the Wing to take on the responsibilities as the Chief of Staff for the Maine Air National Guard in Augusta, allowing him to be promoted to the rank of brigadier general. He is a command pilot with more than 3,900 combined flying hours in fixed and rotary winged aircraft. His previous leadership assignments within the Wing include aircraft commander, Operations Support Flight commander, Maintenance Group Commander, and Operations Group commander.

Bourassa, 53, was commissioned as a second lieutenant in 1989 from the University of Maine's ROTC program. He is a command pilot with over 6,500 combined flying hours on fixed wing aircraft during his time on both active duty and in the Maine Air National Guard. He joined the Wing in 2002, where his previous assignments include pilot, flight instructor, chief of training, operations officer and commander of the Wing's 132nd Air Refueling Squadron in Bangor, and served as the Maine Air National Guard's Director of Operations at Joint Forces Headquarters in Augusta. He was appointed as the vice commander of the Wing in April 2018.

The 101st Air Refueling Wing's mission is to provide core aerial refueling capabilities. The Wing, with almost 1,000 members, enhances the Air Force's capability to accomplish its primary missions of global reach and global power. The Wing also supports the State of Maine by assisting in the protection of life and property, maintaining peace and order, and providing civil defense capabilities.

Col. Frank W. Roy, former 101st Air Refueling Wing commander, addresses his family during the change of command ceremony for the Wing in Bangor, Maine, on Aug. 1, 2020. During the ceremony, Col. Matthew A. Bourassa assumed command of the Wing. Roy, the outgoing commander, will become the Chief of Staff for the Maine Air National Guard at Joint Force Headquarters in Augusta and will be promoted to brigadier general. (Air National Guard Photo by Senior Master Sgt. Jon Duplain)

Col. Frank W. Roy (second from right) relinquishes command of the 101st Air Refueling Wing to Col. Matt Bourassa (right) during a change of command ceremony at the Wing on Aug. 1, 2020 in Bangor Maine. This time-honored ceremony featured the presiding officer, Brig. Gen. Steven Michaud (left), commander of the Maine Air National Guard, and the Wing's Command Chief Master Sgt. Scott Osgood (second from left) transferring the Wing's guidon from the outgoing to incoming commander. COVID-19 precautions required masks be wore while the official party was near one another. As the number of attendees was limited due to the precautions, the Wing broadcast the event live to ensure the ceremony was available to everyone. (Air National Guard Photo by Senior Master Sgt. Jon Duplain)