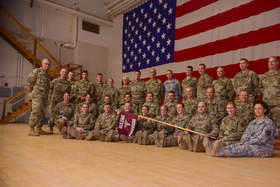 "We saw our own (American) service members and family, but also patients from other countries," said Maj. Jonathan Bausman, the detachment commander, who works as a pediatrician in Portland.

Bausman said the detachment was grateful for the overseas training opportunity because it provided job specialty training that is not available on a standard drill weekend.

Staff at the Vilseck Dental Clinic in Grafenwoehr, Germany, reported that during the three weeks that the Maine Soldiers were on duty, the local dental readiness increased by nearly 3%.

Other locations included a second clinic in Grafenwoehr and Landstuhl, Germany, and Vicenza, Italy. In total, the five teams saw nearly 2,200 patients during their annual training and also formed professional relationships with the staff.

"I found that throughout our rotation, people within our sections would come to us for advice and guidance," said Staff Sgt. Keagan Cote, a preventative medicine specialist. Cote described how rewarding it was to make that individual connection and that it meant a lot to have their active counterparts value their input as National Guardsmen.