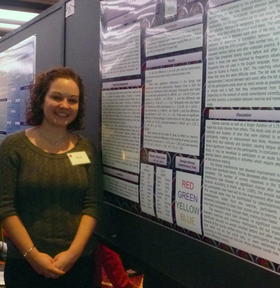 Dr. Rachel Dinero, assistant professor of psychology at Cazenovia College, oversees the students in the Senior Capstone course. She encouraged all her students to submit their research projects for presentation at the conference. Kresge says, "Dr. Dinero helped each of us find a topic that we truly care about. She gets just as excited as we do when we find something we love, which definitely motivates all of us to go above and beyond."

Dinero says that ten of her 19 seniors chose collect data for their capstone projects and the seven who submitted their research were all invited to present their findings. At the conference, she says, "They each spoke knowledgeably about their work and had a great deal of interest from student and faculty conference attendees. I think the individual attention these students receive in both the Research Methods and Capstone classes facilitates their success with independent research. I am extremely passionate about research and make every effort to encourage students to conduct their own research."

Dinero says, "These students are amazing and I am so proud of all of them. This is the most students we've ever had present at a psychology conference. I don't think this is common at other schools, especially any the size of Caz."

Kresge's research project is titled "Acute Exercise's Effects on Cognitive Functioning." Her original interest was exercise in Alzheimer's disease patients. Lacking the clinical environment to carry this out, she chose as her subjects members of the Cazenovia College volleyball team. She says, "I assessed their attention and memory abilities before and after practice. I found that attention improved significantly, however, memory was not affected by the exercise."

When she was younger, Kresge learned a lot about Obsessive Compulsive Disorder. "It was so interesting to learn how we can sometimes control our thoughts and train our minds to do different things," she says. "From then on, I found myself intrigued with anything involving psychology. Now, as a senior, I know it's the perfect field for me. I think it's a profession that I'll be happy with every day. I plan to earn certification in neurodiagnostic technology because I love studying the brain and its diseases."

There were more than 100 posters presented by students from colleges and universities in the eastern United States. Conference attendees roamed the corridors of the exhibition room to study the posters and ask questions of the student researchers. While admitting to being a bit nervous about the presentation, she was much more excited and proud to be showing the results of her research. "My friends definitely helped me; they encouraged me to believe in myself, since no one knew my research better than I did."

During the weekend in New York City, Kresge notes that the group had little opportunity for sight-seeing, but they did have time to walk around the city. She says, "We found a Hurricane Sandy memorial in the middle of Times Square – it was it was a heart made out of wood from boardwalks in New Jersey and New York that were destroyed from the hurricane. It was only going to be on display until March 10, so I was extremely grateful to have been able to see it."