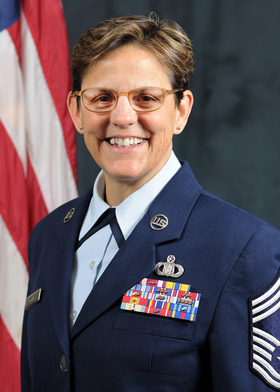 Media members are welcome to attend the ceremony.

WHO: Command Chief Master Sgt. Maureen Dooley, and Major Gen. Dawn Deskins, the deputy director of the Air National Guard who will serve as the officiating officer, and leaders of the New York Air National Guard.

WHAT: A military retirement ceremony in which Dooley will end her military career and be recognized for her accomplishments. The ceremony will be limited to a small group due to COVID-19 restrictions. Deskins, who is currently based in Washington D.C. formerly commanded the Eastern Air Defense Sector in Rome and worked with Dooley for many years.

Reporters can speak with Chief Master Sgt. Dooley and obtain imagery and video of the ceremony.

For access to this secure military facility reporters must call the Division of Military and Naval Affairs Public Affairs Office at 518-786-4581.

She has been replaced by Command Chief Master Sergeant Denny L. Richardson, who formerly served as the senior enlisted Airman in the 109th Airlift Wing at Stratton Air National Guard Base in Scotia.

Dooley previously served as the Senior Enlisted Leader and Group Superintendent for the 224th Air Defense Group in Rome. Dooley served in the active Air Force from 1979 to 1987 and has served in the Air National Guard since Deember 1995.She had a break in service from 1987 to 1995.

Most of the force consists of traditional Air National Guardsmen who serve on a part-time basis, but others serve full-time to ensure readiness.

The New York Air National Guard also includes the Eastern Air Defense Sector, where Dooley had served, responsible for the air defense of the United States east of the Mississippi.

Dooley is a native of Danielson, Connecticut. After joining the Air Force in 1979 she served as an aircraft maintenance specialists on the F-4E and then the F-15 fighter and the T-33 training aircraft before leaving the Air Force.

In December 1995, Dooley enlisted in the New York Air National Guard and joined what was then the Northeast Air Defense Sector (NEADS), part of the North American Aerospace Defense Command, and is responsible for identifying and tracking aircraft flying over the United States and Canada. The unit directs fighters to defend North American airspace.

Dooley is a Distinguished Graduate of the Air Force Senior NCO Academy and holds a degree in Space Technology from the Community College of Air Force.