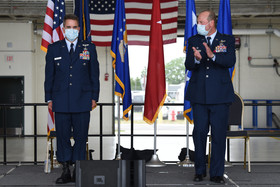 Col. Shawn Fitzgerald ( left) the new commander of the 106 Rescue Wing, is applauded by his predecessor Brig. Gen. Michael Bank during ceremonies on June 5, 2020.

Fitzgerald, a Cutchogue resident, replaced Col. Michael Bank who has led the wing since 2006.

Bank was promoted to brigadier general (one-star) during the ceremony and will be undertaking a new assignment at New York Air National Guard headquarters in Latham, New York.

Because of the social distancing requirements currently in place during the COVID-19 pandemic, this change of command did not take place before the traditional massed formation of wing Airmen. Only key participants-commanders and a few staff members-took part in the event. The participants wore facemasks and observed social distancing rules during the event, remaining as far apart as possible.

The change of command was videotaped and made available to wing members and the public on YouTube and on the Defense Visual Information Distribution System (DIVIDS).

Video of the change of command ceremony can be seen here on You Tube: https://youtu.be/4cj0swHLLN0

In his remarks Shields praised both Bank and Fitzgerald and the Airmen of the 106th Rescue Wing.

"I'm very proud of the wing and can't thank the Airmen enough. They can always be counted on to deliver first class mission support when required" Shields said.

In his remarks, Bank also praised the Airmen of the 106th for their service during his time as commander.

"I am extremely proud and honored to serve with and for these great Airmen that make up the 106th Rescue Wing. God's speed to all of you and your families" ,Bank said.

Fitzgerald said he was looking forward to leading the wing.

Fitzgerald has served in the 106th Rescue Wing since he transferred from the Army to the Air National Guard in 2006.

"I'm honored to be selected as the next Wing Commander of the 106th Rescue Wing. I've had the good fortune and pleasure to be a part of this Wing and I look forward to continuing to work with this great team of selfless Airmen, Fitzgerald said."

"The 106th Rescue Wing has been home to my family and I for the past 14 years. I am proud of the great work done by the men and women of this amazing team. I know we will continue to lead the way through this challenging time," Fitzgerald added."

"I was able to see firsthand the work of Air Force Rescue in Afghanistan," Fitzgerald said, explaining why he decided to join the Air Force. "Watching their professionalism and ability to accomplish the mission made me want to be a part of that team."

During his time in the Army when he served as the brigade assistant operations officer, he was part of Operation Northern Delay, a combat parachute jump staged by 1,000 soldiers of the 173rd Airborne Brigade to seize the Basha Airfield in Erbil during the coalition invasion of Iraq in March 2003. He played a part in planning the mission, which was the largest airborne combat jump into one drop zone since World War II.

Fitzgerald transferred to the 106th Rescue Wing where he first served as director of operations for the 103rd Rescue Squadron, where the pararescue Airmen are assigned.

He and his wife Nicci have two sons, Colin and Trevor.

He has completed the Air Command and Staff College, the Naval Postgraduate School, the Air War College, and Advanced Joint Professional Military Education at the National Defense University.

More than 150 members of the wing have been mobilized in support of the state's COVID-19 pandemic response.