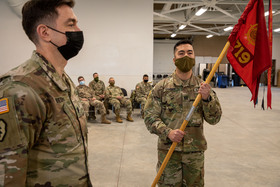 The truck company is part of the 369th Sustainment Brigade.

The brigade traces its history back to the 369th Infantry of World War I, known as the Harlem Hell Fighters, the African-American infantry unit which Albany Medal of Honor recipient Henry Johnson served in.

Samson replaced Capt.Seun Ogunkoya who is moving on to a new assignment.

Samson enlisted in the New York Army National Guard in 2014 and was commissioned through the Officer Candidate School in 2015.

Samson is a 2016 graduate of the Ordnance Basic Officer Leaders where he made Commandant's List. He also graduated from the Logistics Captains Career Course in 2019.

Samson holds a bachelor's degree from Sienna College and a Doctorate of Chiropractic and a Masters of Science in Applied Clinical Nutrition from the Northeast College of Health Sciences.

In civilian life, Samson runs his own chiropractic practice.

His awards and decorations include the Army Commendation Medal, Army Achievement Medal, the National Defense Medal, and Global War on Terrorism Service Medal.