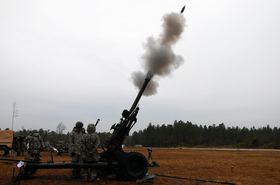 The equipment will be on display at the New York Army National Guard station on Tonawanda Street near the fair's gate 2 until the fair's last day on Sept. 2.

The UH-60 Blackhawk helicopter is the Army's standard transport helicopter. The New York Army National Guard's 3rd Battalion 142nd Aviation has flown these helicopters on combat missions in Iraq and on emergency response missions here in New York during the response to Superstorm Sandy.