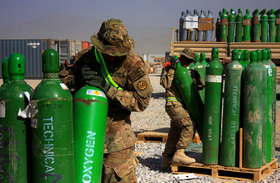 Sgt. Timothy Vandermied, a member of the 427th Brigade Support Battalion works in Bagram during the battalions 2012 Afghanistan mission.

The award recognizes units for exceptionally meritorious performance for six months in a combat zone.

The award was authorized in December 2019, seven years after the Soldiers nine month mission in Afghanistan concluded.

The two companies were recognized for their work in processing and shipping thousands of tons of gear worth millions of dollars from more than 175 bases, combat outposts, and operating locations in Afghanistan that were being closed down.

After being mobilized in 2012, the two companies were tasked to become part of the Central Command or CENTCOM, Material Retrograde Element. This team was dubbed CMRE in Army shorthand.

During post mobilization training at Camp Shelby, Mississippi, the vehicle maintenance experts in Bravo Company, and the Headquarters Company personnel, learned new skills involving inventories, identifying different categories of equipment, and how to assist units on the ground in packing up and shipping their gear back home.

It's a process the Army calls a retrograde.

They worked under the command of the Army's 18th Combat Service and Support Battalion.

Their mission was to help shutdown forward operating bases and other facilities in order to meet President Barack Obama's directive to wrap-up major conventional combat operations in Afghanistan by 2014.

The Soldiers reorganized into Base Closure Assistant Teams that worked with the 82nd Airborne Division, the Australian Army, and the Marine Corps to shut down locations across Afghanistan.

The companies established a Retrograde Sort Yard team to synchronize operations at three central locations which eventually shipped out more than 9,000 containers of equipment. A Materials Redistribution team was also organized and executed a $15 million contract putting 195 contactors in place to continue the movement of material back to the United States.

In one case, a Retrograde Property Assistance Team moved 300 vehicles and 12,000 pieces of equipment belonging to the 82nd Airborne Division's 4th Brigade over a four week period.

Chief Warrant Officer 2 Douglas Sherman, a platoon leader in Bravo Company, submitted a request for the award in December 2012, but the award recommendation got lost in channels.

Sherman continued to follow up and in 2017 he was told to resubmit the award packet again.

Because more than two years had passed since the end of the mission, the award submission to the Army Human Resources Command had to include the endorsement of a member of Congress.

"The Maneuver Area Training Equipment Site located at Fort Drum supports Active Duty, National Guard and Reserve Units and is run by many of the Soldiers that were missioned and deployed for this current request. I am extremely proud of this unit and their service to this great nation," Stefanik wrote in her endorsement letter.

"They are more than deserving of this award," she added in a March 2018 memorandum.

Brig. Gen. Michelle M. Letcher, who currently commands the Army's Joint Munitions Command, but who was the commander of the 18th Combat Service and Support Battalion, also lent her support to the award request.

"I strongly recommend the Meritorious Unit Commendation be awarded to the New York Army National Guard Soldiers that served during my command for their tireless efforts, outstanding contributions and exemplary service," Letcher wrote to Army Human Resources Command.

The Soldiers who served in the two units in 2012 are entitled to the Meritorious Unit Commendation ribbon as an individual award and are always entitled to wear the ribbon.