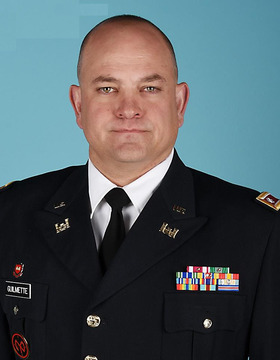 Col. Chris A. Guilmette will replace White Plains resident, Col. Todd Bookless as the commander of the Digital Liaison Detachment, or DLD for short.

WHO: Col. Chris A. Guilmette, the incoming commander; Col. Todd Bookless, the outgoing commander; Maj. Gen. Ray Shields, the Adjutant General of New York and the presiding officer; leaders of the 53rd Troop Command from around the state.

WHAT: A traditional change-of-command ceremony in which the colors, or flag, of the 53rd Digital Liaison Detachment will be transferred from the outgoing commander to the incoming commander. Traditionally the unit colors indicate the commander's location on the battlefield. The traditional military ceremony allows the Soldiers to see who they will follow in battle.

WHERE: Camp Smith Training Site, Cortlandt Manor. Enter via main gate on Bear Mountain Road. Media are asked to arrive no later than 9:30 a.m. for escort and setup.

Still and video images of the ceremony. There will be an opportunity to interview both Bookless and Guilmette.

Members of the press must call Staff Sgt. Jonathan Pietrantoni at 516-655-1336 for access to this secure military facility. Press must have identification and wearing of face masks will be required.

From 2010 to 2013 he served as the Brigade Engineer for the 27th Infantry Brigade Combat Team in Syracuse. This included an active duty deployment to Kuwait in 2012.

Guilmette recently returned from a deployment with the 42nd Infantry Division where he served as the Chief of Protection and led the Division's Force Health Protection response to the COVID-19 pandemic.

Guilmette holds a Bachelor of Science degree from Rensselaer Polytechnic Institute. His military education includes the Engineer Officer Basic and Advanced courses, Combined Arms Staff Services School and holds a Masters of Strategic Studies (2018) from the US Army War College.

In civilian life, Guilmette is employed as a professional engineer with Iron Mountain Data Centers.

Todd Bookless is a native of White Plains, N.Y. He qualified in the UH-1 "Huey" helicopter and the OH-58 Kiowa helicopter at Fort Rucker Alabama, following his commissioning as a second lieutenant in 1994. He has since qualified to fly the UH-60 Blackhawk.

After joining the New York Army National Guard he served in a variety of positions to include Assistant Operations Officer for the 42nd Combat Aviation Brigade at Forward Operating Base Speicher in Tikrit, Iraq in 2005.

In 2011-2012 he deployed to Kuwait with the 27th Infantry Brigade Combat Team as the 27th Military Engagement Team Executive Officer. The team was based out of Kuwait and Bookless conducted military-to-military engagements in Iraq and Jordan.

In 2015-2016 he served as the Officer in charge of a team from the 42nd Infantry Division which deployed to Guantanamo Bay, Cuba to assist in running the Joint Task Force responsible for the detention facilities there. Bookless served as the deputy director of the task force's joint operations section.

In 2016 he commanded the 642nd Aviation Support Battalion and went on to command the 53rd Digital Liaison Detachment in April 2019.

Bookless is currently serving on an active duty tour assigned to NORAD & USNORTHCOM as their Division Chief of Global Force Management.

The unit trains to coordinate, communicate and facilitate all aspects of military operations at higher level-headquarters. The DLD is specifically designed and dedicated to providing a critical capability for mission command liaison and interoperability. The unit carries the lineage and honors of the New York National Guard's historic 7th Regiment.