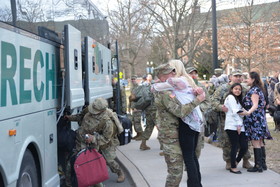 NY National Guard Soldiers bid heir families goodbye as they board a bus following a deployment ceremony at the College of Staten Island on Saturday, January 11, 2019.

Around 2,500 family members turned out to support their Soldiers at the farewell ceremonies which were held at the College of Staten Island, Siena College in Loudonville and the New York National Guard's Army Aviation Support Facility in Rochester.

The Soldiers, who are assigned to the headquarters of the 42nd Infantry Division, which is based in Troy, will deploy to the United States Central Command area of operations later this year.

The division's members have been training for more than a year to prepare for the deployment.

Units in the task force support Operation Spartan Shield with capabilities such as aviation, logistics, force protection and information management.

The 42nd Infantry Division's last mobilization as a unit was in 2004-2005 , when the division headquarters took command of 23,000 Soldiers operating north of Baghdad during Operation Iraqi Freedom.

Organized during World War I with National Guard units from many states, the division is known as the Rainbow Division.

Brigadier General Michel Natali, the New York National Guard's assistant adjutant general for Army, who served in the division during that deployment, told the 200 Soldiers at the Siena College event that " you will write the next chapter of Rainbow Division history."

At the event on Staten Island Major General Ray Shields, the Adjutant General of New York told the 230 Soldiers in his audience that "your hard work preparing for this day is evident in the enthusiasm and professionalism."

Lt. Governor Kathleen Hochul represented the governor at the event in Rochester.

Following the formal ceremonies at each location Soldiers had more time with families before boarding buses heading for Fort Indiantown Gap, Pennsylvania.

The Soldiers will be gone for a year, spending about 10 months in the Central Command are which includes the Middle East.